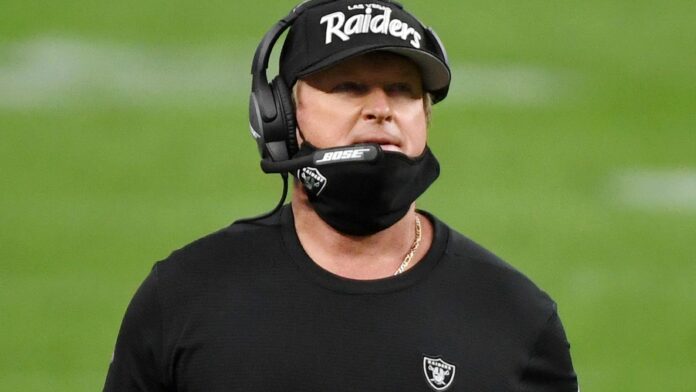 The NFL has fined the Las Vegas Raiders and stripped them of a draft pick for COVID-19 protocol violations, NFL Network Insider Ian Rapoport reported on Friday.

The team were reportedly docked $500,000 and a 2021 sixth-round draft pick, while coach Jon Gruden has been reportedly fined $150,000 for repeated violations despite prior warnings, relating to right tackle Trent Brown’s positive test last month.

It is the NFL’s harshest penalty to date for a violation of COVID-19 protocols, with the Raiders the first team to lose a draft pick.

Brown originally went on the reserve/COVID-19 list on October 21, prompting the Raiders to send home its entire offensive line as it conducted contact tracing.

Brown was set to return to action last Sunday at Cleveland, but was hospitalised after air entered his bloodstream while he was getting intravenous therapy before a game against the Browns.

Brown, a Pro Bowl selection a season ago, has since been released from hospital following the incident, but has been placed back on the reserve/COVID-19 list and is still experiencing complications from the virus, according to multiple reports.

This is the fourth incident in which the franchise has been penalised, with the total amount of fines now reaching $1.2m, according to reports.

Previously, Gruden and the club were fined $100,000 and $250,000, respectively, due to Gruden’s failure to follow proper face-covering protocol.

In a separate incident, quarterback Derek Carr and tight end Darren Waller were among 10 players fined for not following protocol at a charity event in which they were seen in photographs and video without masks.