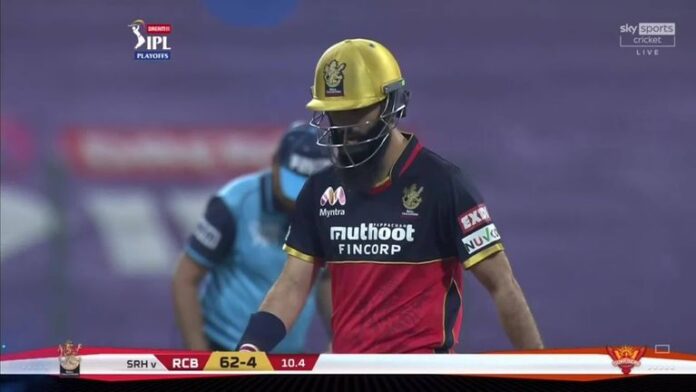 Jason Holder’s excellent new-ball burst set the tone for the Sunrisers as he removed Virat Kohli in his first over and Devdutt Padikkal in his next, finishing with figures of 3-25, as RCB were restricted to 131-7.

Sunrisers lost Shreevats Goswami and, after a controversial review, David Warner to Mohammed Siraj in the powerplay and Manish Pandey soon after but Williamson held his nerve, reaching his 14th IPL fifty in the final over before Holder sealed the win with back-to-back boundaries.

While RCB, for whom AB de Villiers (56 from 43 balls) struck a fine half-century, must wait another year to claim their first IPL title, the Sunrisers progress to Qualifier 2 on Sunday, where they will face Delhi Capitals for a place in the final.

After Warner put RCB in to bat, the first big move came from Kohli as he moved himself up to open; a decision he may have regretted when he gloved a sharply-climbing Holder delivery behind down the legside to depart for six.

Holder struck again in his next over with Padikkal (1) unable to add to his growing reputation as he pulled a back-of-a-length delivery to Priyam Garg, who took a good catch above his head at midwicket.

Aaron Finch, back in the side and slotting in at No 3, was joined by De Villiers and the experienced pair set about rebuilding. Progress was, in T20 terms, slow but Finch slog-swept Rashid Khan for six and managed to get another couple of boundaries away before he fell in the 11th over.

It was the left-arm spin of Shahbaz Nadeem (1-30) that got him, caught at deep cover trying to up the run-rate. Moeen Ali came in and was given the perfect opportunity to make a good start with the first ball he faced a free hit after Nadeem overstepped.

Instead he drilled the ball to Rashid at extra cover, ran and when the fielder hit with just one stump to aim at, he was barely in the picture and had to go for a duck.

At 62-4, RCB’s hopes lay with De Villiers. The South African was forced to bide his time, especially when Holder returned to claim his third wicket, Shivam Dube caught by Warner, but a couple of boundaries in quick succession as he moved to a 39-ball fifty suggested that a big finish was on the way.

T Natarajan had other ideas though, bowling the RCB star with a near-perfect yorker to uproot his middle stump in the 18th over, just four balls after he had had Washington Sundar caught at deep point.

Navdeep Saini and Siraj clawed RCB up to 131 and then went about trying to defend it. Siraj gave them the start they were after when he had Goswami, in for the injured Wriddhiman Saha, caught behind in the first over and then changed ends to remove Warner late in the powerplay.

The second dismissal was not without controversy though. Originally given not out, RCB reviewed and the first replays appeared to show the ball brushing Warner’s thigh pad rather than bat or glove.

UltraEdge showed a spike when the ball was very close to the glove as well as thigh pad and after much deliberation the third umpire, much to the batsman’s disgust, decided that was enough to overturn the on-field call.

It was then over to the RCB spinners with Yuzvandra Chahal and Adam Zampa causing the Sunrisers batsman real problems. The Australian had Pandey (24 from 21) caught behind and three overs later, Chahal dismissed Garg (7).

That brought Holder to the crease with SRH 67-4, joining Williamson. The Sunrisers could hardly have asked for a more cool-headed duo and the two international skippers calmly went about their work, Williamson picking his moments to attack, taking Sundar and Chahal for big sixes over the legside, before returning to accumulating ones and twos.

With such a low total to chase, a boundary an over was enough and, until the last, that is exactly what they got. Williamson was slightly fortunate when he clubbed a full toss from Saini to deep backward square, where Padikkal took the catch as he overbalanced, threw the ball up but could not get back to complete the grab – more a save than a drop.

Two balls later Williamson angled the ball fine of short third man for four and there the Sunrisers never looked back. Holder sent a thick edge to the boundary in the 19th over and Warner’s side were left needing nine from the last.

Williamson reached his fifty from 44 balls with a single first up and after Saini beat Holder with a wide yorker, the West Indian responded by nailing the next ball to the fence, through extra cover, and sealed the win with another boundary, guided through backward point.

Watch IPL Qualifier 2 as Delhi Capitals and Sunrisers Hyderabad compete for a place in the final on Sky Sports Cricket from 1.50pm on Sunday.