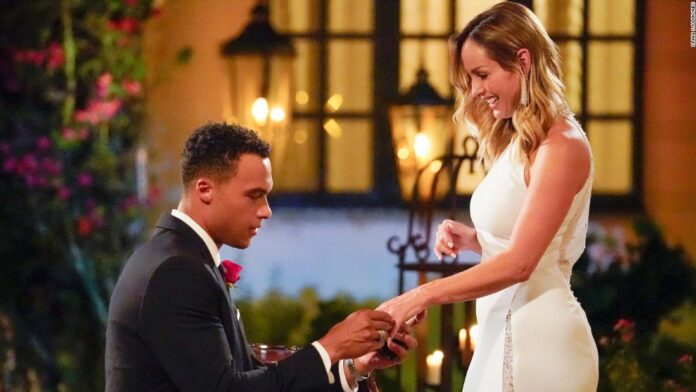 She became the first Bachelorette to find love so quickly that she didn’t even finish her season of the show, and now she and contestant Dale Moss are engaged.
Thursday night’s episode lived up to the drama ABC had been promising.
The network gave a sneak peek last week in which host Chris Harrison tells a tearful Crawley that she has just “blown up ‘The Bachelorette.'”
“We have never dealt with anything like this in the history of our show,” Harrison can be seen telling some of the men vying for Crawley’s heart.
Now we know that’s because she quit to pursue a relationship with Moss, a former professional football player who captured her heart from the start.
The pair seemingly couldn’t stay away from each other, even stealing away to be together during a group date.
On Thursday night she revealed that she was in love with Moss, even though the pair had only known each other a short time.
“He meets me on the level emotionally of what I’m looking for,” she said. “Everything I want out of a relationship, everything I want out of life.”
Apparently, when you know, you know.
Suffice it to say the other 16 men competing to get a rose were not happy.
But that didn’t stop Moss from asking for Crawley’s hand in marriage, telling her he knew the moment he met her that “this was special.”
“The best is yet to come,” Moss told her as he proposed. “I’m not going anywhere and I want to make you happy each and every day.”
Where does all of this leave Bachelor Nation?
They can now root for “The Bachelor” contestant and “Bachelor in Paradise” participant Tayshia Adams, who is the new “Bachelorette.”
A finalist from Colton Underwood’s season of “The Bachelor” last year, Adams becomes the second African-American woman to ever star in the show, after attorney Rachel Lindsay in the 13th season.