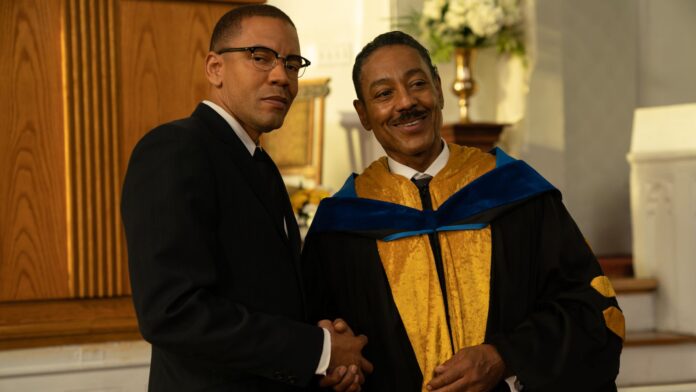 Giancarlo Esposito has been acting for decades and has over 180 credits to his name.

And while he’s best known for playing the quietly terrifying Gus Fring in Breaking Bad, or more recently for his Emmy-nominated role as Moff Gideon in The Mandalorian, his latest part sees him bringing a piece of history – and a real person – to the small screen.

The 62-year-old stars in Godfather Of Harlem about the real crime boss Bumpy Johnson, who returns from prison in the 1960s to find his New York neighbourhood controlled by the Italian mob.

He told the Sky News Backstage podcast that playing a real person has a big impact on how he approaches a role: “It changes it completely because I want to honour the man.

“And so in a way, it’s a good thing for me as an actor because it puts my ego aside and I want to honour and get underneath the skin of who he really was, not only in his professional life, but also in his personal life. What were his foibles? What was his downfall?

“It’s a great responsibility for me to play someone who is a historical figure, even if you don’t know much about that person, because to me, that is my responsibility, is to render that person real.”

The real Clayton Powell was hugely influential. He was the first African American to be elected from New York to Congress, and he became a national spokesman on civil rights and social issues.

Esposito said he did a vast amount of research on the congressman.

“I read books, stacks of paper of the information that the writers had that they didn’t even offer to me until I asked… They realised that I knew so much, and they went ‘Whoa’ and I said, ‘Well, yeah, this is what I do’, so then they gave me their research on top of the research I had already done.”

“I also wanted to render him physically real – he was a bigger man than I am so I wanted to puff myself up to feel as if I could be in his physical body, and he had certain kinds of gestures.

“And I really watched and figured out the cadence of his voice and all of those things, and then I forgot it because I believe that, you know, the trap is you don’t want to mimic someone, you like to bring all of who you are as an actor to it as well.”

The show sees Esposito reuniting with Oscar-winner Forest Whitaker, who he’s worked with several times before.

He says their long-term relationship has led to them having a natural rapport on set together.

“I know Forest fairly well professionally, we had done a film years ago, I think it was his directorial debut, Waiting To Exhale,” Esposito said.

“And we’ve done a couple of pilots together, we’ve had the opportunity to create a rhythm in our work together.

“I know him well, he is subtle, and he comes from a very organic place, and does his research as well.”

A second season of Godfather Of Harlem has already been commissioned and is now due to start filming.

Esposito says he’s excited at the prospect of getting out of his home and away from Zoom (where he’s doing all the publicity for the show).

But he admits he’s wary about the realities posed by coronavirus: “I’m excited to be back on set yet I have some apprehension because of what’s going on in the world, of course.

“So I have to remind myself that I’m responsible for me and I have to keep myself safe, it’ll be interesting to see how it goes, I know there could be some bumps in the road, but we’re doing everything to take COVID-19 precautions.

“But it’ll be great to get back in front of a camera – that’s a real camera, not this one!”

The Godfather Of Harlem is streaming on Starzplay now. Listen to the full interview with Giancarlo Esposito on this week’s Backstage podcast.