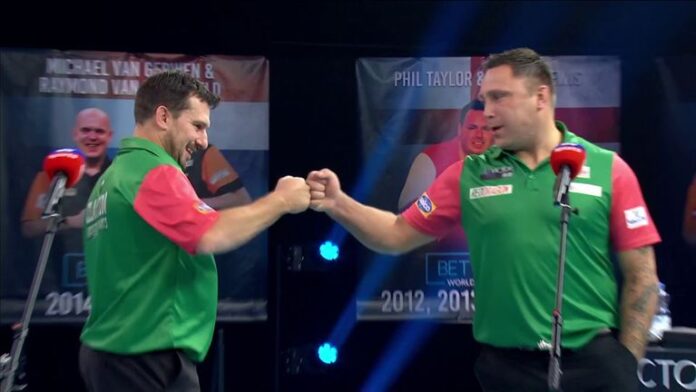 Coverage of the World Cup of Darts continues across the weekend with two more sessions on Saturday followed by the quarter-finals, semi-finals and final on a bumper Sunday of action.

Wales will face defending champions Scotland in a blockbuster second-round showdown at the World Cup of Darts on Saturday, as Gerwyn Price and Jonny Clayton stole the headlines with a dominant display on Friday night in Salzburg.

Following a marathon opening day at at the Salzburgarena which saw two seeded nations fall by the wayside, Wales were arguably the most impressive of the fancied sides, crashing in five maximums in as many legs en route to victory.

The new-look Scottish pairing of John Henderson and Robert Thornton advanced to set up a tie against the second seeds, as four-time champions Netherlands – led by world No 1 Michael van Gerwen, breezed through for the loss of a solitary leg.

Wonderful Wales put down a marker

Having been backed by many to challenge for glory in Salzburg, Price and Clayton justified their pre-tournament favourites tag with a stunning display of scoring, which included five 180’s in as many legs.

The second seeds flew out of the blocks – Clayton converting an effortless 130 finish for a 12-dart opener, followed by Price rattling in a brace of maximums to leave 20 after just nine darts in leg two.

Their average was decimated by a 28-dart leg in the third, although they rectified matters with an 11-darter in the fourth, before Price sealed their progression moments after Clayton missed the bull for an eye-catching 161 clincher.

Despite the defeat, Russian captain Boris Koltsov displayed immense courage to represent his country after his father, who was also his coach and inspiration, sadly passed away on Thursday.

Price and Clayton now face holders Scotland for a place in Sunday’s last eight, as Henderson and Thornton overcame 2019 semi-finalists Japan in a tentative affair.

‘The Highlander’ was making his World Cup bow alongside four-time participant Thornton due to the absence of last year’s winners Peter Wright and Gary Anderson, but the Scottish stalwarts kept their title defence alive in Austria.

Scotland punished an abject start from Japan to seize the early initiative, until a 120 checkout from Asada in leg three changed the outlook.

However, the Japanese duo were comprehensively outscored and despite spells of double-trouble from the Scots, Thornton fired in a brace of maximums in the latter stages to lead his side to victory.

In a battle of the former finalists, 2012 runners-up Australia accounted for last year’s finalists Republic of Ireland, as Whitlock and Heta claimed the spoils at the expense of William O’Connor and Steve Lennon.

The Irish duo completed a 13-dart break of throw to make the perfect start, but Whitlock and Heta responded with a barrage of blistering scoring – piling in four 180’s to register winning legs of 15, 15, 14 and 16 darts.

They displayed signs of fragility on the outer ring in the closing stages, yet Republic of Ireland were unable to capitalise and Whitlock kept his nerve to set up a meeting with Poland in round two.

Krzysztof Ratajski and Krzysztof Kciuk underlined their credentials with an emphatic whitewash success over two-time quarter-finalists South Africa, who were led by an in-form Devon Petersen and debutant Carl Gabriel.

The South Africans were stifled by the relentless Polish pair, who opened up with three consecutive 15-dart legs, before Ratajski curtailed any slender hopes of a fightback with a nerveless 92 combination in leg four.

Van Gerwen is the only player in this year’s field to have lifted the World Cup title and the Dutchman began his bid for a fourth triumph with a convincing 5-1 victory over Brazilian duo Diogo Portela and Bruno Rangel.

The world No 1 is by partnered by former Lakeside world finalist Danny Noppert in Salzburg this weekend, and Van Gerwen produced a captain’s display to settle debut nerves for ‘Noppie’.

Van Gerwen’s form has been the subject of scrutiny over recent months, with the 31-year-old failing to reach a televised final in his last five attempts, yet he showed little sign of nerves on Friday evening.

The three-time world champion signalled his intent with a maximum in his opening visit, whilst a majestic 134 checkout in the fourth provided the highlight, as Netherlands advanced with a 94 average and 71% on the doubles.

The four-time winners will face former semi-finalists Spain on Saturday, following their narrow 5-4 success against Italy earlier in the day.

Sixth seeds Germany were the fourth whitewash winners of the evening, as they posted the highest average of the opening round to demolish Finland.

The Germans were poised to post a ton-plus average but for a late mishap in leg five, though it mattered not, as they disposed of Marko Kantele and Veijo Viinikka with relative ease.

The former hosts now play Greece in Saturday’s second round, after John Michael and Veniamin Symeonidis created history by registering their first victory in the competition.

Greece – without a World Cup win since 2017, produced a stellar display to stun beleaguered Swedish pair Daniel Larsson and Dennis Nilsson, averaging over 90 and converting 63 per cent of their attempts at double.

Meanwhile, last-gasp replacements Latvia marked their World Cup bow with a hard-fought win over Hong Kong to set up a meeting with fifth seeds Belgium in round two.

Madars Razma and Janis Mustafejevs were called up at late notice to deputise for China, and they were rewarded with a landmark success, despite having to survive match darts from Kai Fan Leung and Royden Lam in a dramatic climax.

Don’t miss a dart at this weekend’s World Cup of Darts – the action continues from 12pm on Saturday on Sky Sports Arena and we will have the remaining four sessions as the new champions are crowned.