Home Sport Thunder aiming to cause a storm 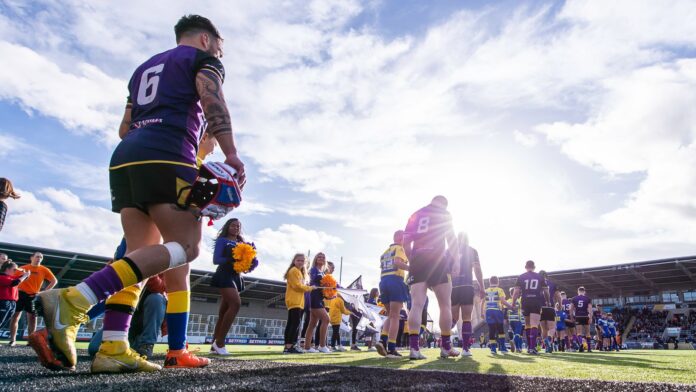 Newcastle’s aim is to win Super League by 2030. Chairman Mick Hogan says: “People check to see I’ve not been drinking because, let’s be honest, most of Super League hasn’t won it – so why would some crackpots in the north-east win it? But we believe we’ve got everything in place.”

It is 21 years since Gateshead Thunder flew the flag for the north east of England in Super League for a single season. If their descendants have their way though, it may not be long before the region has a presence in the top flight again.

But the venture was claimed to have lost £700,000, the club were merged with Hull Sharks to become Hull FC and a new Thunder side was formed by the fans for the 2001 Northern Ford Premiership, and are yet to return to Super League.

With just under one year to go, we take a look at how the north-east is preparing to be a focal point of RLWC 2021.

Now carrying the Newcastle name though, having relocated across the River Tyne to Kingston Park following a takeover by the city’s rugby union team in 2014, the club have their sights set on not only returning to Super League but being champions in the not-too-distant future as well.

“We’ve got some big plans and the biggest aim we’ve got is to win Super League by 2030,” Thunder chairman Mick Hogan told Sky Sports.

“When I say that, people check to see I’ve not been drinking because, let’s be honest, most of Super League hasn’t won Super League – so why would some crackpots in the north-east win it? But we believe we’ve got everything in place.

“We need a fair bit of luck, we need a couple more promotions yet, but we can win Super League in 2030 and that’s what we’re aiming for.”

When Sky Sports spoke to Hogan, the sport in this country was yet to learn whether Toronto Wolfpack would be allowed back into Super League for 2021 after withdrawing ahead of this season’s restart.

But since then the Canadian club’s business plan has been rejected, meaning an opportunity for the Thunder to fast-track their way in may have opened up as Super League looks to fill the vacant 12th spot in the division through a mini-licensing process.

Should they apply, the League One side are likely to face stiff competition from Championship sides like Toulouse Olympique, London Broncos and York City Knights, although even before this came about Newcastle could make a pretty compelling case for their Super League potential.

For starters, the city is familiar turf for Super League, having hosted Magic Weekend five times at St James’ Park and been due to do so again in 2020 before the coronavirus pandemic intervened.

We need a fair bit of luck, we need a couple more promotions yet, but we can win Super League in 2030 and that’s what we’re aiming for.

The north east is the fastest-growing area in the country in terms of participation too and has 14 community clubs stretching from Alnwick to Catterick, while the sport in the region will receive a further boost next year when the Rugby League World Cup comes to Newcastle and Middlesbrough.

Having those major events combined with the community work the Thunder do right across the region is what Hogan, who originally hails from the rugby league hotbed of Leigh, sees as key to growing the sport in the area he has long called home.

“The two work hand-in-hand,” Hogan said. “You put that together and that’s how you develop a sport.

“It’s not a short-term fix, it takes an entire generation so not only will the kids we’re coaching today come through and have a great career in whatever variant of the sport it is – it could just be touch rugby – once they come through and become parents, and bring their kids through and pass on that love of rugby league, that’s when we’ll know we’ve succeeded.

Great work from everyone who attended our half term coaching camp today 🙌🙌🙌 #ThunderFamily pic.twitter.com/oCuGQoQmKM

“That’s what happens in Wigan, Hull or Leeds. There’s no shortcut to that in the north-east, but we think we’re laying some foundations so that in 15 or 20-years’ time we can have what they have.”

Thunder are one of the few clubs outside of Super League to have an academy set-up as well, with a big focus on increasing participation through touch rugby and plans in place to eventually launch women’s and wheelchair teams.

It is all part of the ambition of Newcastle Rugby Ltd – the entity comprising the Thunder and rugby union club Newcastle Falcons – owner Semore Kurdi has for both codes to be thriving in the area.

“If you ask our owner, what’s his drive and why is he involved in professional sport, why does he spend an inordinate of money in supporting it, yeah he loves to win one or two trophies but it’s not what drives him,” Hogan said.

York City Knights head coach James Ford on the progress of the club and their Super League ambitions.

“What drives him is he wants Kingston Park to become a centre for rugby, no matter what your ability or interest. You can turn up there, you can play, you can watch and just feel part of that rugby community – and when he says it, he means it.

“He’s put money behind in and invested in those facilities and invested time in it. That long-term aim is very much in place and if you look what we do in the community, we deal with so many different sectors of the community and try to involve them in their own way within either rugby league or union.”