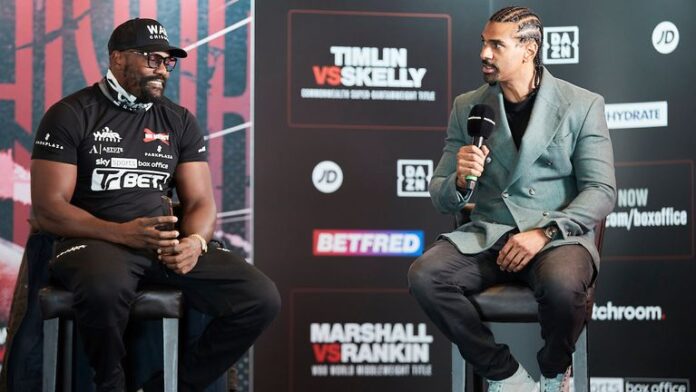 Dillian Whyte says about Derek Chisora: “He let himself down by not having any boxing experience in his corner to guide him and tell him what to do”; Chisora was offered up by his manager David Haye to fight Whyte at short-notice; Whyte will wait to face Alexander Povetkin in 2021

Dillian Whyte has questioned why David Haye allowed Derek Chisora to have a set of trainers with no “boxing experience” in his corner for the defeat to Oleksandr Usyk.

Chisora fell to a unanimous decision loss to the unbeaten Usyk but his manager Haye claims he is “ageing like a fine wine” and wanted him to rebound at three weeks’ notice to fight Whyte this month.

“I thought Derek could have done much better,” Whyte told Sky Sports about his old rival’s performance against Usyk.

“He let himself down by not having any boxing experience in his corner to guide him and tell him what to do.

“Derek was the boss in his corner. They aren’t boxing coaches and they didn’t give the advice he needed to make the adjustments to beat Usyk.

“One of them said: ‘If you win this round, you are winning the fight’.

“That is a lack of boxing experience. Because he was fit and throwing punches they thought he was winning. No!

“Why wasn’t Haye in his corner? Or Dave Coldwell who has trained him before? Don’t just have your mates in the corner for the biggest fight of your life.”

Whyte will wait until a targeted date of January 30 for his postponed rematch with Alexander Povetkin instead of accepting Chisora’s challenge for a short-notice fight on November 21.

Whyte must avenge his knockout loss to Povetkin to reclaim the mandatory challenger status to Tyson Fury’s WBC heavyweight title.

Haye had taunted Whyte to accept Chisora’s challenge: “I think it’s a great fight. Dillian said he’s the ‘can man’.

“‘Anyone who wants it can get it!’

“We’ve heard him say he would fight anyone but everyone is running from him. Well, we’ve got someone here! What are you going to do?

“He knows that he’s better than Whyte. He reviewed their last fight – unfortunately he got scrappy and desperate after getting points deducted. He knows that he underperformed.

“Now he’s significantly fitter, his punch volume is better, his defence is better.

“On two weeks’ notice he would put forth a significantly better effort than he did in their second fight.

“Derek might be 85 or 90 per cent but that is more than enough to beat Whyte.

“Who is the better fighter? Dillian thinks he is. But he hasn’t watched his most recent fight too many times.

“We’ll see what Dillian’s appetite is for this trilogy.

“This version of Derek? The Derek we saw on Saturday would knock out the Whyte that we saw against Povetkin.”