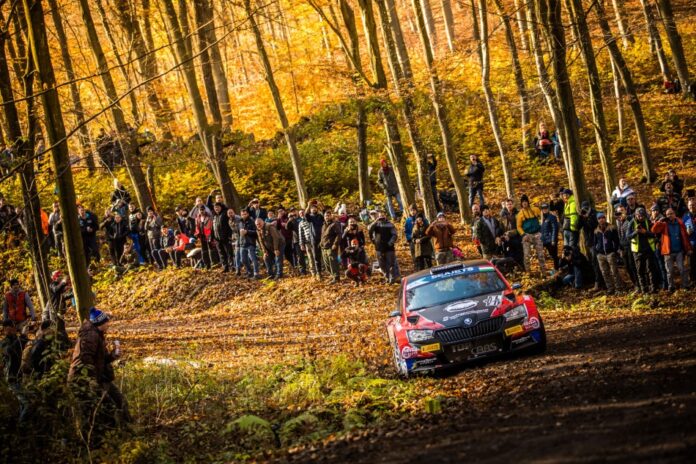 *Torn heading to victory in ERC3/ERC3 Junior, Érdi Jr on course for home triumph in ERC2

Andreas Mikkelsen came, saw and has so far conquered Rally Hungary, leading on his return to the FIA European Rally Championship as part of a high-quality, multi-national entry.

The world championship event winner, competing in a Topp-Cars Rally Team-run, Pirelli-equipped Škoda Fabia Rally2 Evo, was a contender from the start alongside co-driver Ola Fløene.

After trailing ORLEN Team’s Polish champion Miko Marczyk through Friday’s opening superspecial, Mikkelsen was second to Alexey Lukyanuk on SS2, but able to take a lead he has yet to relinquish, despite a spin on SS3.

“It’s been a very good day,” said Mikkelsen, who has been fastest on five stages. “We’ve been driving within the limits and have a good gap for tomorrow, we can’t ask for much more. It’s one thing going testing with Pirelli, it’s great and keeps me fit but I’m a competitive guy, I love sports and I like to challenge myself and see where I am against the others. This is a good opportunity to do that.”

European championship leader Lukyanuk was 5.1s behind Mikkelsen at the midday service halt in Nyíregyháza but far from happy at the completion of SS6, reporting live on Facebook and YouTube that he’d been checked in to the stage start control five minutes early. The ensuing five-minute penalty has dropped the Russian firmly out of contention to the extent he’s unlikely to score ERC points of the first time this season in his Saintéloc Junior Team Citroën C3 R5.

Craig Breen is second overnight, 23.6s behind Mikkelsen after an overshoot and a spin this morning. However, the Irishman underlined his star quality and the progress of his MRF Tyres by claiming a brace of stage wins in his Hyundai i20 R5. “To get a podium for MRF Tyres and the team is very important, they’ve been working so hard. It’s quite incredible to be getting stage wins after a short period of time.”

Emil Lindholm was fourth and firmly in contention for an overnight podium place after eight stages but was reported to have got stuck after going off the road in his Team MRF Tyres Škoda on SS9.

Oliver Solberg, Munster’s closest ERC1 Junior title rival, dropped down the order with a front-right puncture on SS7 then lost more time with a left-rear deflation on SS9. “I was running in the middle of the road, I honestly don’t know how it happened,” he said. “It’s so annoying to have two punctures now. The other drivers have moments and they don’t get anything.”

Solberg’s double delay in his Eurosol Fabia demoted him from third to ninth with double ERC Junior champion Marijan Griebel moving up to sixth, followed by Niki Mary-Melnhof and Callum Devine, who completed SS7 with a front-left puncture on his Motorsport Ireland Rally Academy Hyundai then lost 20s when he went backwards into a field on SS9. A mere 2.8s covers Llarena, Griebel and Mayr-Melnhof.

Simon Wagner, on his first European championship start since his ERC1 Junior podium in the Czech Republic in August 2019, is a strong P10 after nine stages, followed by Devine’s Motorsport Ireland Rally Academy team-mate Josh McErlean, who is making his ERC debut in Hungary, and former Hungarian champion András Hadik.

Erik Cais started Rally Hungary on the back of winning two national rallies in his Yacco ACCR Team Ford Fiesta R5 MkII. But an off on SS2 wrecked his hopes of a strong result, although the Czech youngster underlined his promise with the second fastest time on the final stage, which he completed 1.2s down on rally leader Mikkelsen. He’s P13 overnight.

Brose Motorsport’s German hope Dominik Dinkel is P14 having been hampered by a pop-off valve issue, damaged wheel rim and, more significantly, a faulty intercom, which meant he was hearing co-driver Ursula Mayrhofer’s pacenotes only intermittently. Yoann Bonato is P15 after he went off on SS3. Miko Marczyk is P16 after stopping to change a puncture.

Russian Rocket’s rousing run in ruins
Alexey Lukyanuk had been the man to beat in this season’s ERC with two wins and a second-place finish alongside new co-driver Dmitry Eremeev. But their run is over after Eremeev erroneously checked in to start SS6 five minutes ahead of schedule. With a five-minute penalty dropping him down to P18, Lukyanuk hinted he might not start Sunday’s stages. “I will decide later,” the dejected Russian said.

Torn turns things round in ERC3/ERC3 Junior battle
Estonian Autosport Junior Team’s Ken Torn was leading ERC3/ERC3 Junior after four stages in his Ford Fiesta Rally4 but slipped behind Rallye Team Spain’s Pep Bassas – his main title rival – following a puncture on SS5. Bassas, in a Peugeot 208 Rally4, extended his margin on SS6 but a time loss on SS7 allowed Torn to get back in front. He’s 27.9s ahead of Bassas heading into leg two. Ola Jr Nore is third on his ERC debut at the wheel of a Toksport WRT-run Renault Clio RSR Rally5, which was sporting a damaged intercooler at the end of SS9. Amaury Molle is fourth in ERC3 Junior after Norbert Maior retired his Napoca Rally Academy-backed 208 Rally4 with a broken driveshaft. Rachele Somaschini withdrew with the recurrence of a shoulder injury. Raul Badiu is fourth in ERC3 followed by Hungarian lady driver Adrienn Vogel. Martin László was in the podium fight in ERC3 until he got stuck in a ditch on SS5. A gearbox issue has plagued him throughout the afternoon.

Érdi Jr on course for a third ERC2 victory at home, Rada leads Abarth Rally Cup
Hungarian hero Tibor Érdi Jr is on course for a third ERC2 win this season after he completed leg one with a comfortable margin ahead of Zelindo Melegari. Dmitry Feofanov is third with Abarth Rally Cup leader Martin Rada fourth followed by Andrea Mabellini. The Italian retired on SS1 with a suspension and restarted this morning with a five-minute time penalty. Mihnea Mureșan was leading the Abarth Rally Cup on his debut but went off the road on SS6. Roberto Gobbin crashed out on SS7.

Hard day for Hungarian title hopefuls
It was a disastrous start to the day for reigning Hungarian champion Ferenc Vincze Jr, who retired 300 metres from the beginning of SS3 with a turbo issue. As well as chasing ERC points, Vincze Jr began Rally Hungary locked in a close fight with Ádám Velenczei in his bid to defend his title. Velenczei, who is making his ERC1 Junior debut this weekend, was P15 after five stages but retired following SS6 with broken right-rear suspension.

The role of an unexpected savior is not new to Tyler...