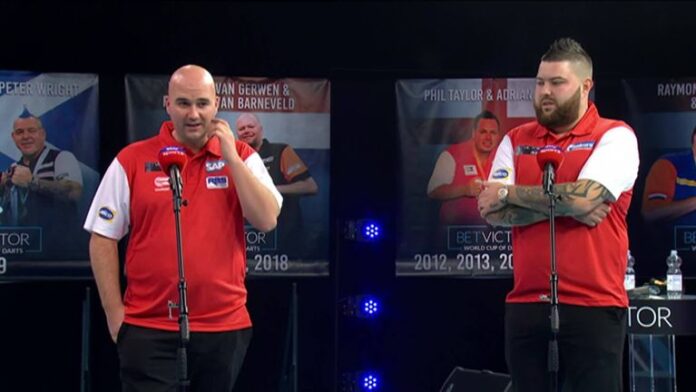 Watch the thrilling conclusion to the World Cup of Darts on Sunday as England, Netherlands and Wales chase the title. Coverage begins on Sky Sports Arena at midday with all four quarter-finals followed by the evening session of semi-finals and final. Which team will be crowned champions?

England, Netherlands, Belgium and pre-tournament favourites Wales all made it through to the quarter-finals of the World Cup of Darts in Salzburg on Saturday.

The team of Michael Smith and Rob Cross proved too good for Lithuania as England made it through to a showdown against hosts Austria.

Gerwyn Price was in electrifying form for Wales as they ended Scotland’s hopes of retaining their title, while the Netherlands – inspired by world No 1 Michael van Gerwen – sent Spain packing.

Smith and Cross made further progress as a pair as they eased past Lithuania 2-0.

Smith averaged a cool 91.09 in a calm and composed display to dismantle Darius Labanauskas 4-0, and then Rob Cross landed a stunning 10-dart leg to break the resistance of Mindaugas Barauskas before sealing a 4-2 victory for the four-time winners.

“If anyone was going to be the muppet between us it would be me,” Cross gave an honest assessment of his performance, despite a relatively comfortable afternoon at the office.

Austria are next for England after the eighth seeds of Mensur Suljovic and Rowby-John Rodriguez defeated debutants Portugal.

Rising star Jose De Sousa, who won a European Tour title last month, went down to a spirited 4-2 loss to Suljovic while Jose Marques, who competed in the 2020 Qualifying School, was unable to trouble Rodriguez, losing 4-1.

Aussies next up for Wales

Wales continued their outstanding start to their challenge to claim a first World Cup triumph with the team of Price and Jonny Clayton doing enough in the deciding doubles rubber to send defending champions Scotland out of the tournament.

‘The Iceman’ moved 3-0 up in no time before a fine 121 from John Henderson started the fightback. However, Price landed D8 to seal a 4-2 win along with a superb 104 average.

Clayton and opponent Robert Thornton both endured doubles woe in their clash. But it was the three-time major winner from Scotland who pinned D18 for a 4-2 victory and send the content all the way into pairs action for the first time in the second round.

Wales dodged some bullets, but Price’s barrage of treble hitting and some clinical finishing from Clayton ensured they made it through to the last eight with a fine 4-0 triumph, averaging 101.90.

Simon Whitlock averaged a neat 95.82 as ‘The Wizard’ won a high-quality contest against Poland’s Krzysztof Ratajsk 4-3, which included a timely 117 checkout. Australian teammate Damon Heta – making his World Cup debut after replacing Kyle Anderson – then eased past Krzysztof Kciuk 4-1 with a three-dart average of a cool ton.

The pair recorded the first and third highest averages of the day as they moved into the quarter-finals.

Big-hitter Van Gerwen demonstrated his powerful scoring and eagle eye finishing to defeat Toni Alcinas 4-0. He wasted no time in getting a leg on the board with a 112 finish before breaking in the next. He quickly wrapped things up to complete a whitewash win.

Debutant Jesus Noguera was next up for Spain against Noppert, and the Dutchman found himself 2-1 and 3-2 down, but last year’s World Series Finals runner-up stayed calm to send the rubber into a final leg decider.

Noguera then missed six match darts to allow Noppert in to steal a cliffhanger of a match.

Belgium through to Canada clash

The 2013 finalists and this year’s dark horses Belgium went up against late call-ups Latvia, who were aiming to continue their fairy-tale World Cup debut having replaced China late in the day.

The World Matchplay champion found things hard going on the outer-ring early on, but his second successful dart at a double from 15 attempts in the fifth leg kept him in the contest as Razma failed to close out a shock win with two missed match darts.

Van den Bergh edged through in the end thanks to a superb 103 checkout in the deciding leg to complete a 2-0 victory for the Belgians.

“Today, it wasn’t good and if it was any other country then we would have got knocked out,” admitted Huybrechts. “Now it gets serious and if it’s like that performance, then we’re going home.”

They will next meet Canada after the pairing of Jeff Smith and Matt Campbell saw off New Zealand 2-0 in the opening tie of the day.

Smith produced a clinical performance to defeat Haupai Puha 4-1 before Campbell closed out a comfortable victory by beating Cody Harris 4-2.

The tournament concludes with all four quarter-finals followed by the evening session of semi-finals and final, live on Sky Sports Arena from midday Sunday.