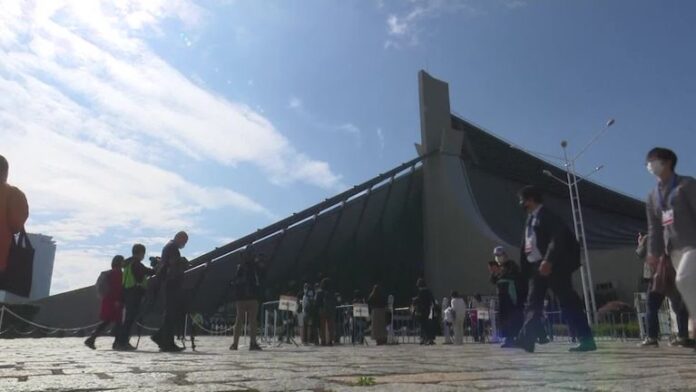 Gymnasts from Japan, China, Russia and USA took part in Friendship and Solidarity Competition in Tokyo; Around 2,000 were reportedly in attendance; The event is seen as the first major test event for delayed Olympics

Tokyo has hosted its first international sporting event since the coronavirus pandemic, seen as a major trial ahead of next year’s postponed Olympics in the city, with a reported 2,000 fans in attendance.

A total of 30 gymnasts from Japan, China, Russia and the United States competed in the Friendship and Solidarity Competition.

The one-day exhibition gymnastics meeting is intended to show that the postponed Tokyo Olympics can open in just under nine months.

Uchimura’s place in the competition had been in jeopardy after the Japanese star tested positive for coronavirus late last month, but he subsequently returned multiple negative tests and completed his period of isolation before competing.

The non-Japanese participants entered after a 14-day quarantine at home and were kept in strict isolation in their hotel, when not competing.

Speaking after the event, Uchimura said: “I think this event is a good model case for other sports and other athletes.

“I think we have to go from thinking we can’t hold the Olympics to how can we do it. I really hope we’ll be able to do that somehow.”