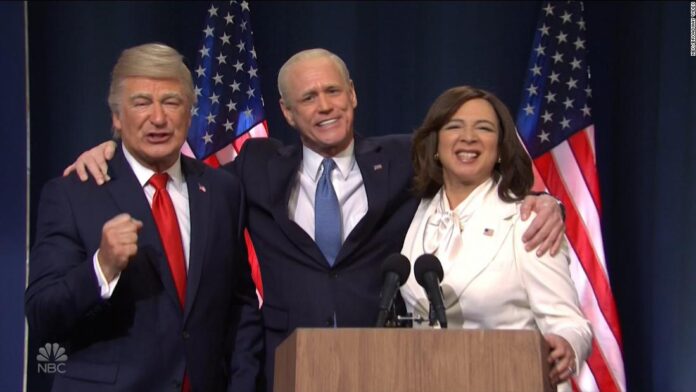 “Thank you very much, America! We did it!” Carrey’s president-elect said, opening the NBC variety show. “Can you believe it? I honestly kind of can’t. It’s been so long since something good happened.”
Carrey’s Biden said it may have taken forever, but now he’s “never felt so alive.”
“Which is ironic since I’m not that alive,” he said.
Carrey’s Biden also said he would be a president to all Americans.
“Whether you’re from a liberal state like California, or a conservative state like Oklahoma, or a cracked out hot mess like Florida,” he said.
Then Carrey’s new president-elect brought his running mate out to speak.
“To all the little black and brown girls watching right now, I just want to say this — the reason your mom is laughing so much tonight is because she’s drunk,” Rudolph’s Harris said. “And the reason she’s crying is because she’s drunk. Your mom is going to switch from laughing to crying to dancing pretty much all night.”
But “SNL” didn’t just show off Biden and Harris’ victory speeches, it also checked in with Alec Baldwin’s Donald Trump for the President’s “concession” speech, or lack thereof.
“Thank you for coming to watch my victory speech tonight,” Baldwin’s President Trump said. “As anyone who died halfway through Tuesday knows, I was re-elected president of the United States.”
Baldwin’s Trump then said that the election was being stolen from him.
“Let’s hear it. Stop the count! Stop the count!,” Baldwin’s Trump yelled before being told that he was not leading in the race. “What’s that? I’m behind. Count all the votes!”
He then vowed to fight the results of the election to the bitter end.
“This isn’t goodbye, America,” he said. “See you in court!”
Finally, the sketch went back to Carrey’s Biden and Rudolph’s Harris, who said that unlike President Trump, they do accept the results of this election.
“We have to act graciously in victory,” Carrey’s Biden said. “We need to go forward together. Unfortunately, there are situations in life, and this is one of them, where there must be a winner and…”
Carrey’s Biden paused.
“A looooooooooser,” Carrey’s Biden said, in the voice of Carrey’s classic Ace Ventura character.
Then Biden’s Carrey, Rudolph’s Harris and Baldwin’s Trump opened the show by saying the show’s signature catch phrase, “Live… From New York! It’s Saturday night!”