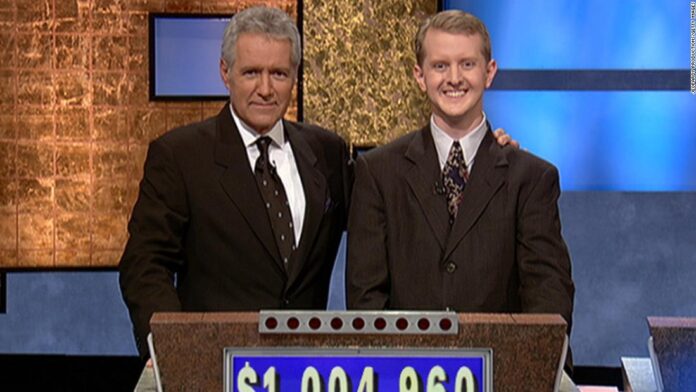 The game show and its host, Alex Trebek, have provided some stable enjoyment in the midst of much instability this past year.
Trebek died Sunday at the age of 80 after a battle with pancreatic cancer.
Despite being ill, the long-time host continued to work on his hit quiz show and recently enjoyed a rare night in which returning champion Kevin Walsh found himself answering the final question solo after the other two contestants ended up with either a deficit or zero balance.
Here are some other memorable moments from the show:

When Trebek debuted as host of “Jeopardy!” in 1984, he sported a healthy mustache.
It became his signature look. Viewers were shocked he shaved it off in 2001, giving him a more youthful appearance.
He went back and forth over the years with mustache and without, before finally settling on a clean-shaven look the past few years.
In 2018, Trebek announced on Twitter that his wife “voted” for him to go without his facial hair. So that settled it.

Mixing it up with a sister show

For April’s Fool Day in 1997, Trebek switched places with “Wheel of Fortune” host Pat Sajak.
What followed was… different.
Both games shows — and their hosts — have been beloved for years, so viewers rolled with it.

There may have never been more excitement surrounding the competition than in 2014, when contestant Ken Jennings won 74 games back to back, the longest streak in “Jeopardy!” history.
The software engineer didn’t do too shabby in the winnings department either, bringing home $3,370,700.
Jennings would go on to become an author as well as the winner of “Jeopardy! The Greatest of All Time,” special tournament.
He snagged the grand prize of $1 million as champion.

Showed him the money

James Holzhauer thrilled viewers in 2019, when he made history setting the record for the largest single-game winnings at $131,127.
He went on to enjoy a 32 consecutive-game winning streak and won one of the “Tournament of Champions” specials.
But it’s contestant Brad Rutter who is celebrated as one of the biggest money winners ever on the show.
Thanks to his various appearances on the franchise, including a $2.1 million win during one of “Tournament of Champions,” Rutter has earned more than $5 million from the show.

Professor Scott Weiss created a true moment of sportsmanship in 2007. He structured his final wager so that if he and his two fellow contestants would all have $16,000 if everyone answered the final question correctly.
They did and it led to the show’s first ever three-way tie not involving zero dollars.
All three returned for the following episode.