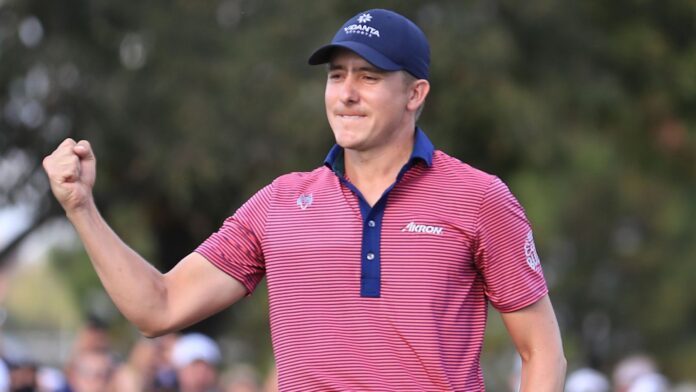 The 29-year-old finished on 13-under par, two shots ahead of Dustin Johnson and Hideki Matsuyama, to win the biggest title of his career. He is not on the entry list for next week’s Masters but has secured an invitation for the major in 2021.

Carlos Ortiz won his first PGA Tour title at the Houston Open after holding off strong challenges from Dustin Johnson and Hideki Matsuyama.

A birdie at 16 proved crucial for Ortiz as he moved one clear of world No 1 Johnson and Matsuyama, who surged into contention with a course-record 63.

Johnson and Matsuyama missed putts to join Ortiz on 12-under par and the Mexican sealed victory with a birdie at the last to win by two shots and earn himself a place at the 2021 Masters.

The world No 149 is not on the entry list at Augusta this week, but Johnson and Matsuyama demonstrated they are both likely to be among the contenders for the final major of 2021.

Matsuyama was one of three players – along with Mackenzie Hughes and Talor Gooch – to shoot a 63 on the last day while Johnson put pressure on Ortiz until the last. However, the Mexican kept his composure to win the biggest title of his career.

“It feels awesome,” he said. “It’s been a while since I have won – it feels good.

“I made some huge putts on the front nine, that kickstarted my round, and after that I played really good, I didn’t miss many shots, and it was awesome finishing with the birdie on 18.”

Sam Burns started the final day with a one-shot lead but quickly saw his position at the top of the leaderboard under threat.

Shane Lowry and Brooks Koepka were among the early movers, with four birdies in a row putting Lowry one off the lead after five holes and Koepka moving into contention with three birdies in his first six.

Johnson also started positively with a huge birdie putt at the second followed by another birdie at the third to take a share of the lead.

Burns regained his advantage with a birdie at the third, but a double-bogey six at the fourth hole saw him slip back, while Jason Day, who started the day a shot off the lead, also faltered with a two-over front nine.

Ortiz nudged in front with a birdie at the fourth, but was soon joined at the top by Johnson, with Koepka – five under for his front nine – not far behind.

Ortiz opened up a two-shot advantage with back-to-back birdies to finish his front nine while Koepka narrowly missed a birdie putt at 12.

Back-to-back bogeys on 10 and 11 hurt Lowry’s chances, but Johnson continued his challenge by holing a 60-foot putt for birdie at the 11th and Matsuyama moved into contention with successive birdies at 12 and 13.

As Koepka slipped with bogeys on 14 and 17, it was Johnson who looked the most likely to topple Ortiz and a first birdie of the week at 15 saw the American move into a share of the lead.

Ortiz missed a fantastic eagle chance at 16, but tapped in from close range to move back in front just as Matsuyama recorded another birdie to move to 11-under par.

Johnson and Matsuyama both missed chances to move to 12 under and Ortiz not only held his nerve on the final hole but holed a birdie putt to win by two shots.