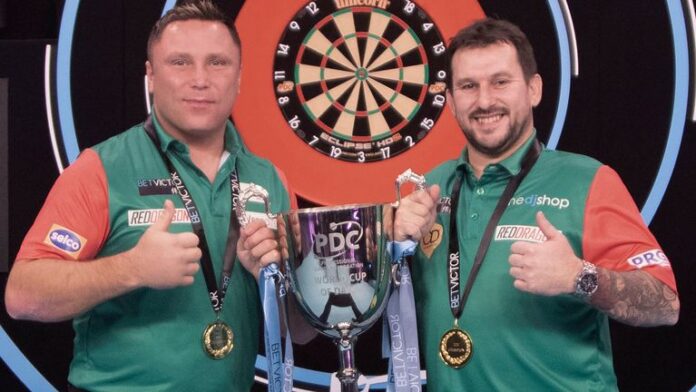 Wales become just the fourth team to win the World Cup of Darts after England, the Netherlands, and Scotland as Gerwyn Price and Jonny Clayton produce the goods to defeat Michael Smith and Rob Cross 3-0 in the final

Wales were crowned World Cup of Darts champions for the first time in their history after the dream team of Gerwyn Price and Jonny Clayton whitewashed England in Sunday’s final.

Price was in sensational form all weekend as he anchored the Welsh to history alongside his partner Clayton, who saved his best darts for the final as the duo crushed England’s hopes of a fifth title with a blizzard of blistering darts to seal a famous 3-0 victory.

“I’ve won the Grand Slam back-to-back, the World Grand Prix, the World Series, but for Wales, it means a lot,” said Price after victory in Salzburg. “It’s going to be a proud moment playing next year and seeing our pictures on the wall.”

Clayton, who qualifies automatically for the Grand Slam of Darts, added: “I’m the proudest man in the world at the moment, it’s awesome.”

England were aiming to win the title for the first time since the team of Phil Taylor and Adrian Lewis in 2016 as Smith took to the stage against the in-form Price in the race to three points.

‘Bully Boy’ hit two maximums on throw in the first leg, but still lost it as Price took out 70 on the bullseye. Smith responded with a 68 finish before the reigning two-time Grand Slam of Darts champion pinned D10 for a 2-1 lead and he capitalised on six costly missed darts from Smith to land tops and move a leg away from victory.

And Price completed a handsome 4-1 win in the end after pinning D6 for a 72 finish to hand Wales the perfect start.

Clayton was hoping to edge Wales closer to the promised land but Cross was fired up for a crucial rubber. He hit D4 to win the opening leg on throw before Clayton responded. The Hastings thrower hit D16 to move 2-1 ahead.

A neat 13-dart leg gave Clayton the next leg and he piled on the pressure with a maximum as his three-dart average crept above a ton. He returned to break with a two-dart 84 checkout.

And ‘The Ferret’ got the job done to win 4-2 with a superb 105 average, hitting three 180s and 66 per cent on the doubles to move Wales a point away from the title.

England were now at the point of no return, needing to win the pairs rubber. However, Wales were throwing freely as they looked to finish things off in style.

Price pinned tops to move Wales 2-1 ahead, but Smith squared matters with a neat two-dart combination at 70. The Welsh moved to the cusp of glory when ‘The Iceman’ finished off D4 for a 3-2 lead.

Cross responded with a magnificent 142 checkout to force a last-leg decider in which Wales had the throw. It was left to Price to land the all-important throw at tops to win the competition for the first time in their history.

England faced Belgium in the first semi-final and it was Smith and Cross who won nail-biting last legs to go through to the final.

Smith went up against Kim Huybrechts in the first rubber and the St Helens thrower went out in 13, 14 and 15 darts on throw, but the Belgian stayed with his opponent all the way to the deciding leg.

When Huybrechts went the wrong side of D18 for the match, Smith made no mistake at D6 for a 4-3 win ahead of Cross’ clash with Dimitri Van den Bergh.

Both players were finding life hard on the big stage in a tension-filled battle as the reigning World Matchplay champion edged 2-1 in front after taking out 68. But then the match sparked into life when they each struck 180s in the fourth leg with Cross eventually holding in 14 darts.

And he was ready to pounce in the next leg, but Van den Bergh coolly finished off 66. The Belgian then missed bullseye for what would have been a spectacular 164 for the win, but Cross stayed calm to send us into a thrilling last-leg decider.

It didn’t disappoint with the 2018 world champion surviving five match darts from Van den Bergh to close out a 4-3 victory and put England into a sixth World Cup final.

Wales too classy for Germany

There were no doubles needed in the second semi-final either as the Welsh duo of Price and Clayton ended German hopes to reach their third World Cup of Darts final and first since 2017.

In a nervy first rubber, Price was let off the hook early doors as Gabriel Clemens failed to capitalise on his chances and when the Welshman landed a spectacular 116 finish, he found himself throwing for the match.

But Price squandered three match darts and that allowed Clemens to pounce and make it 3-2. The reigning World Grand Prix champion responded against the throw to nail tops with his fifth match dart to eventually complete the win.

Clayton had the chance to finish the job against Max Hopp and he made the best possible start with a maximum following by two darts at 58. He soon cleaned up 41 for a 2-0 lead.

Hopp was not getting time to breathe against a relentless Clayton, despite a hold of throw in the next leg. ‘The Ferret’ put Wales on the verge of the final with a steely 98 checkout, as Hopp hung on with a 48 finish.

But Clayton delivered when it mattered thanks to a stunning 121 on the bull to prevail 4-2 and ending with a 104.4 three-dart average.

Don’t miss a dart when we return from the Grand Slam of Darts at the Ricoh Arena in Coventry from Saturday, November 14 until Sunday, November 22 – live on Sky Sports Arena.