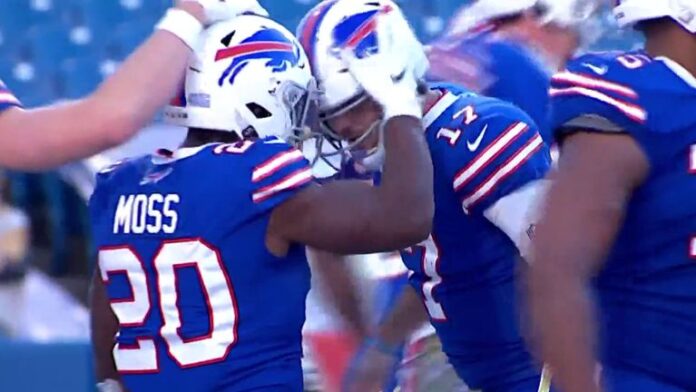 Josh Allen dominated in the air for the Buffalo Bills with 415 yards for three touchdowns, while Russell Wilson threw for two scores and two interceptions as the Seattle Seahawks were made to pay for a poor defensive display in the first half

Josh Allen went 31 of 38 passing for 415 yards and three touchdowns as well as running in for a score as the Buffalo Bills moved to 7-2 on the year with a 44-34 victory over the Seattle Seahawks.

Russell Wilson kept the Seahawks alive as he finished 28 of 41 for 390 yards, two touchdowns and two interceptions after being sacked five times and hit on 11 other occasions.

The damage was ultimately done in the first half as the Seahawks’ 32nd ranked defense failed to show up, with Buffalo leading by as many as 17 points before offensive coordinator Brian Daboll adjusted well to increased pressure on Allen after the break.

The Bills got off to the perfect start when Allen fired a 25-yard touchdown pass to Isaiah McKenzie on the opening drive of the game after a 60-yard kickoff return from Andre Roberts.

Amid Seattle’s bid to reduce the deficit Wilson was intercepted by Jordan Poyer in the end zone on fourth-and-one, before a 44-yard field goal from Tyler Bass pushed Buffalo’s lead to 17-0.

The Seahawks were finally on the board when Wilson sneaked in from one-yard out after a 25-yard pass interference penalty against Tre’Davious White while covering D.K. Metcalf on the sideline.

Allen was back in scoring range in no time, though, and took advantage with a four-yard touchdown pass to Gabriel Davis as he felt rare pressure coming up the middle from safety Jamal Adams. The Bills followed up by holding Seattle to a 45-yard field goal from Jason Myers.

Having forced a fumble from Wilson on Seattle’s first drive of the second half, the Bills went further ahead with a 22-yard field goal from Bass after Allen had salvaged a second-and-27 situation with a 39-yard pass to Davis.

The Seahawks hit back through rookie running back DeeJay Dallas, who punched it in from four yards out after big first-down pickups from Metcalf and tight end Jacob Hollister.

After a 44-yard field goal from Myers, the Bills replied with a one-yard rushing score from Zack Moss following a perfectly-executed screen play call from Daboll that had unleashed John Brown for a 33-yard catch-and-run just shy of the goalline on third-and-16.

Buffalo reestablished the dominance they had lost in the third quarter moments later as Allen ran in a three-yard touchdown to reward White’s 30-yard interception return.

Wilson responded immediately with a 55-yard touchdown pass to an untouched David Moore, before A.J. Klein strip sacked the Seahawks quarterback as well as recovering the ball for the Bills’ fourth takeaway.

There was still time for a 31-yard field goal from Bass followed by a seven-yard touchdown catch from Metcalf to make things interesting late on.

Golf courses to reopen in England from December 2