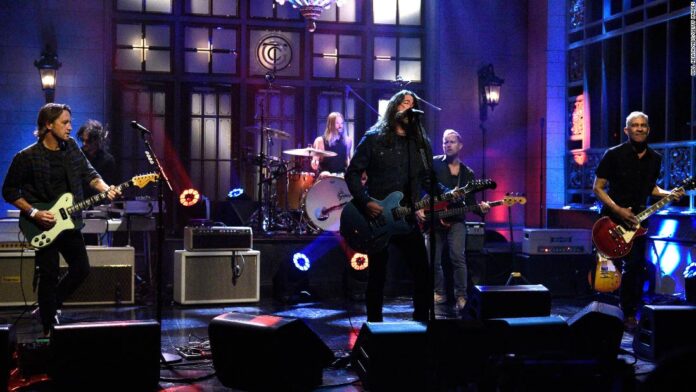 The single — which was officially released as the episode aired — will appear on the rock band’s 10th studio album due out February 5. The band also performed their 2002 hit song “Times Like These.”
The “SNL” episode aired the same day as Joe Biden and Kamala Harris were projected the winners of the presidential race, and actors Jim Carrey and Maya Rudolph did not miss a beat.
“Thank you very much, America! We did it!” Carrey’s president-elect said, opening the show. “Can you believe it? I honestly kind of can’t. It’s been so long since something good happened.”
Carrey’s Biden also said he would be a president to all Americans.
“Whether you’re from a liberal state like California, or a conservative state like Oklahoma, or a cracked out hot mess like Florida,” he said.
Then Carrey’s new President-elect brought his running mate out to speak.
“To all the little Black and brown girls watching right now, I just want to say this — the reason your mom is laughing so much tonight is because she’s drunk,” Rudolph’s Harris said. “And the reason she’s crying is because she’s drunk. Your mom is going to switch from laughing to crying to dancing pretty much all night.”