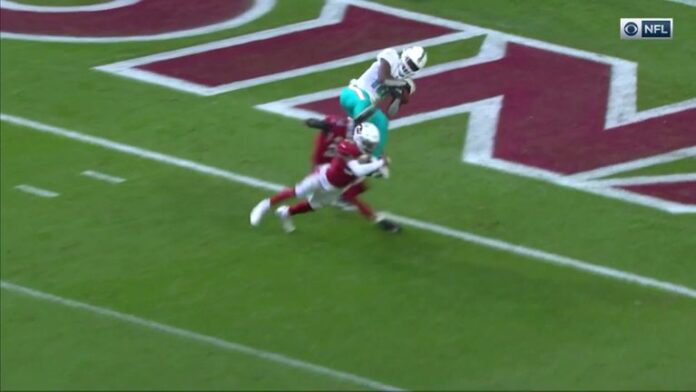 Tua Tagovailoa threw for 248 yards, with two touchdowns in his second NFL start, guiding the Miami Dolphins to a fourth-straight win; Kyler Murray had 283 yards passing and three TDs, as well as a career-best 106 rushing yards and a score

Miami Dolphins’ rookie quarterback Tua Tagovailoa got the better of Arizona Cardinals’ own, exciting young QB talent Kyler Murray as he led his team to a thrilling 34-31 win in his second NFL start.

Tua completed 20 of 28 passes for 248 yards, with two touchdowns and no turnovers. He also ran seven times for 35 yards as Miami (5-3) won their fourth-straight game – the team’s longest winning streak in four years.

On the Arizona (5-3) sideline, Murray was also hugely impressive, despite defeat, going 21 of 26 passing for 283 yards and three TDs, as well as rushing for a career-best 106 yards on 11 carries and a score. He did, however, give up one turnover, a fumble which gave Miami an early lead.

Although the QB clash was the big draw, Dolphins kicker Jason Sanders also had a crucial role in the victory as he made two field goals, including a career-best 56-yarder. His other conversion, from 50 yards, set a Dolphins record for consecutive kicks without a miss (20) and proved to be the winning score.

It gave Miami a 34-31 lead with three minutes and 30 seconds left on the clock; the Dolphins defence forced the Cardinals into a 49-yard field goal try by Zane Gonzalez to tie the game and possibly take it to overtime but he missed with the kick.

Miami started the game by scoring a defensive touchdown for the second week in a row as Shaq Lawson returned an Emmanuel Ogbah strip-sack of Murray 36 yards to the endzone.

Murray responded in the best way possible, throwing touchdown passes on Arizona’s next two possessions – including a 56-yarder to Christian Kirk – but the Dolphins answered each of those with scores of their own, including a nine-yard strike from Tua to Preston Williams, who injured his foot on the play when diving for the goal line.

The Dolphins led 24-17 at half-time, but the Cardinals turned that into a seven-point lead by the end of the third quarter as Murray found the endzone on a 12-yard run following off the back of a 21-yard scoring strike to Darrell Daniels, who outwrestled Miami cornerback Byron Jones for his first career TD.

But Miami surged back ahead in the fourth, with Tua impressively marching Miami down the field on a 10-play, 93 yard drive capped by finding Mack Hollins for the game-tying TD. It was then left to Sanders to fire through a 50-yard field goal to ultimately win an epic clash.

Victory sees Tua move to 2-0 against Murray in his career, having also beaten him in college when they were with Alabama and Oklahoma, respectively.