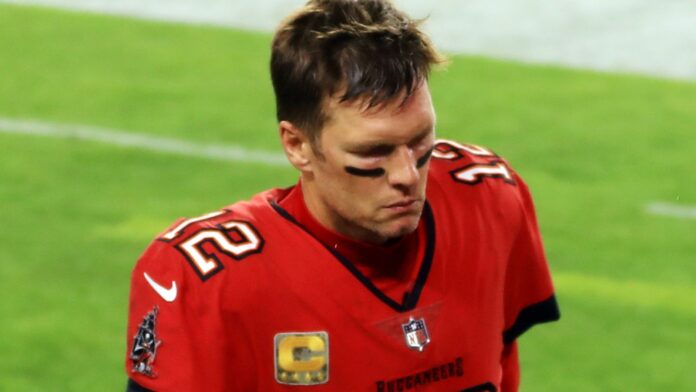 Drew Brees throws four touchdown passes to overtake Tom Brady for the most in NFL history (564 to 561); Antonio Brown has three catches for 31 yards in Buccaneers debut, while Michael Thomas had five grabs for 51 yards in his return for the Saints

Brees entered the game one touchdown pass behind Brady for the most in the history of the NFL but, after the hugely contrasting fortunes for the two veteran QBs on the night, Brees leads with 564 TDs to Brady’s 561.

The Saints (6-2) won their fifth consecutive game and bypass the Buccaneers (6-3) into first place in the NFC South after a season sweep of their divisional rivals – it’s the first time in Brady’s career he has lost twice to the same team in one season.

It was clear early on in the game it was going to prove a far trickier contest for Tampa Bay than many had predicted; having averaged 36 points per game in a three-game win streak coming into Sunday’s meeting with the Saints, Brady’s Bucs badly stumbled out of the gate, particularly on offence.

Tampa Bay went three-and-out on each of their opening four possessions, while Brady threw his first interception to David Onyemata on their next series, seeing his stat line read a paltry 4-of-12 passing at the time, for 27 yards and a pick.

By that point, contrastingly, Brees had expertly led three Saints touchdown drives – finding Tre-Quan Smith, Adam Trautman and Emmanuel Sanders in the endzone – and, following on from Brady’s interception, Alvin Kamara went over at the goal line for a fourth first-half score.

A Will Lutz 36-yard field goal made it 31-0 to New Orleans going into the break, with Brady – who threw a second pick to Marcus Williams in the dying seconds – staring down the largest ever half-time deficit of his storied career.

The start of the third quarter offered a glimmer of hope, as the Buccaneers recovered a Brees fumble on the first possession and subsequently drove down to the Saints one-yard line, only to then turn the ball over on downs for the second time in the game when failing to convert on fourth down.

Brady’s third and final interception was picked off by Malcolm Jenkins late in the third quarter, and Brees then turned that turnover into a three-yard touchdown pass to Josh Hill early in the fourth, seeing him streak ahead of Brady by three on the all-time passing TDs list.

Ryan Succop’s 48-yard field goal with just under six minutes remaining ensured Tampa Bay were at least able to avoid a shutout, but the 38-3 scoreline represents the most lopsided loss of Brady’s career.

The Buccaneers also now own the unwanted record of the fewest amount of rushing attempts in a game in NFL history, as the early hole they dug themselves on offence meant they ended up rushing the ball just five times as they desperately and disastrously tried to pass they way back into the contest.

Saints All-Pro receiver Michael Thomas returned from injury to play for the first time since the season opener and had five catches for 51 yards. Fellow All Pro Antonio Brown, making his Buccaneers debut after serving an eight-game suspension to start the season, had three catches for 31 yards.