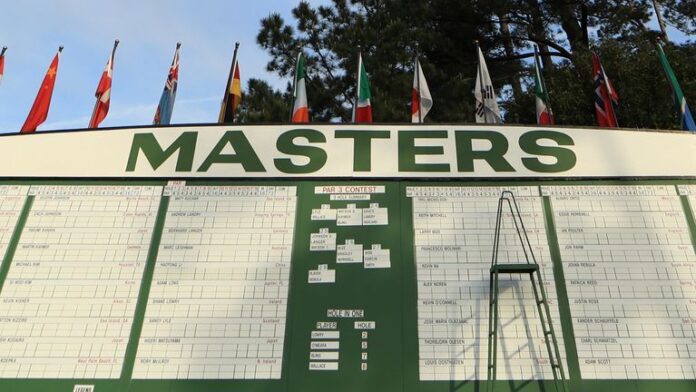 “For Rory McIlroy, there is that added pressure of requiring the Masters title to join the five greats in capturing the Grand Slam of majors. Instead of pressure, Rory should see it as an incentive”

Ewen Murray casts his expert eye over the contenders at the Masters and believes it could be Xander Schauffele’s time. And what will it take for Rory McIlroy to get over the line at Augusta National?

It’s been a long wait to see Augusta National in its splendour again, but the Masters is now just a few days away from returning to living rooms around the world.

For the ﬁrst time, this captivating tournament will not be among the azaleas, ﬂowering Dogwood and crimson Cherry trees. The late evening sun will, like dusk, come earlier in the day.

But fear not. This hallowed land will be dressed in its premier autumn togs. The burnt orange-red oaks will glisten in the autumn sun along with the tall Georgia pines standing proudly framing and jealously guarding the immaculate fairways.

The course itself will have diﬀerent vistas. The viewer will see just how undulating the fairways are and without the patrons, gone will be the famous Augusta roars and groans over the back nine on Sunday. Yet the actors on this glittering stage will perform.

Birdies and eagles will still be delivered by the world’s best. Golﬁng disasters will still be prevalent at Amen Corner and by Sarazen’s bridge at the 15th. There may be a hole-in-one at 16 and a Green Jacket will be presented in the Butler Cabin when all of the acts and drama have been played out. Appetite whetted? I think so.

The course won’t play a great deal diﬀerent from April. Maybe softer, but with Augusta’s sub-air system, the greens will be as ﬁrm as Augusta want them to be and the green speed much the same as we’ve seen down the years. So in general, fairly familiar.

We move on to the contenders of which there are several; many of them names we all know. Bryson DeChambeau has mentioned he may be armed with a 48-inch driver and he recently said he’s recorded his ﬁrst carry with a driver of over 400 yards.

Patrick Cantlay is back to winning ways, and Justin Thomas continues to impress and has added consistency to his commendable talent. Dustin Johnson hopefully will be Covid-free and ready to add to his one major delivered at Oakmont four years ago.

Phil Mickelson’s and Tiger Woods’ best days, many will believe, is behind them, yet their impressive records at Augusta could prove that thought is ﬂawed.

Patrick Reed has furthered his golﬁng education by playing around the world and could well end up being the European Tour’s Race to Dubai champion. Collin Morikawa will be keen to add to his maiden major, won brilliantly in San Francisco.

I love watching Tony Finau playing golf. He makes the game look easier than it is, but on the greens, he doesn’t match the excellence of his peers. That explains over 30 top-10 ﬁnishes in the last four years, but just the one victory coming in Puerto Rico in 2016.

And then there’s Bubba. Six years on from his second Masters victory, his form has taken an upward turn in the last few weeks.

My own thoughts on America’s contingent are that it could be Xander Schauﬀele’s time. Such an impressive golfer with no weaknesses, a calm temperament, and perhaps his major apprenticeship has been served.

Our home hopes are understandably high. In Tyrrell Hatton, we have an outstanding player who will continue to perform at the highest level. His win at Wentworth in the BMW PGA Championship elevated him into the world’s top 10 for the ﬁrst time. A good driver, his iron play is superb – a prime requisite to prosper at Augusta.

Paul Casey’s Masters record is good and he could be inspired by his runner-up ﬁnish in the PGA Championship at Harding Park a couple of months ago. Tommy Fleetwood has had two second places in majors, at Shinnecock Hills and Royal Portrush and, at the latter event, Lee Westwood booked his early invitation by ﬁnishing fourth. A win for Lee would cap a glorious career, having won all over the globe.

Justin Rose is still struggling to ﬁnd his best form. This is a spell that every player goes through at some time in their career, but he has the class, as well as good Masters memories, to turn things around.

Our other major champions, Shane Lowry and Rory McIlroy, will be followed by many of you. Shane has shown the odd ﬂashes of the quality he possesses recently and his enviable short game will be a strong asset over the four days.

For Rory, there is that added pressure of requiring the Masters title to join the ﬁve greats in capturing the Grand Slam of majors. Instead of pressure, Rory should see it as an incentive.

With the course playing a little longer than in the spring, his ability oﬀ the tee and the height he can ﬂight long irons is a big plus. I believe he is an accomplished putter but work is required on his wedge play. He’s too one-dimensional. He needs to add some variety to his shots from 140 yards and in.

Too often, the ball is just dispatched into the air. That means his landing targets are minimal, especially when the pins are placed towards the back of the putting surfaces. A lower ball ﬂight played towards the pin instead of over it would reap more handsome dividends as it would give him more control of spin.

By his own admission, he’s dropped too many “silly” shots since the return of golf, and I believe on the majority of these occasions, the wedge has been the guilty party. His 29 birdies over four days at the recent Zozo Championship (the most he’s had in a tournament) suggests not much is wrong.

Live From The Masters

If he can put his ﬁnger on what that is, Jack, Tiger, Ben, Gary and Gene will have company from mid-November.

Jon Rahm will be much fancied, and he is clearly a player born for the big stage. His shootout with Dustin Johnson at the BMW in Chicago was one of the most memorable tournaments of this troubled year.

The international challenge is also strong. Adam Scott gave Australia its ﬁrst green jacket in 2013, South Africa has the talent to add to their history, while Japan’s hopes of a maiden Masters rest in the talented hands of Hideki Matsuyama.

So there, I’ve given you close on the full list of contenders, but in sport there are always surprises. It’s one of the reasons we love it. The dark evenings have arrived within our shores and Sky Sports will have Featured Groups coverage from just after midday, before joining the host broadcaster for full live coverage from late afternoon into the evening.

Rich Beem will be on course and I know you will all be thrilled to hear that Butch Harmon joins us in commentary for the week. It’s 72 years since his father, Claude, won at Augusta National.

There is no getting away from the fact it will be a diﬀerent spectacle from years gone by, yet as always, there will be Amen Corner, Rae’s Creek, the lightning quick undulating greens, Hogan’s and Sarazen’s bridge.

Yes, despite the change from spring to autumn, it will still be The Masters.