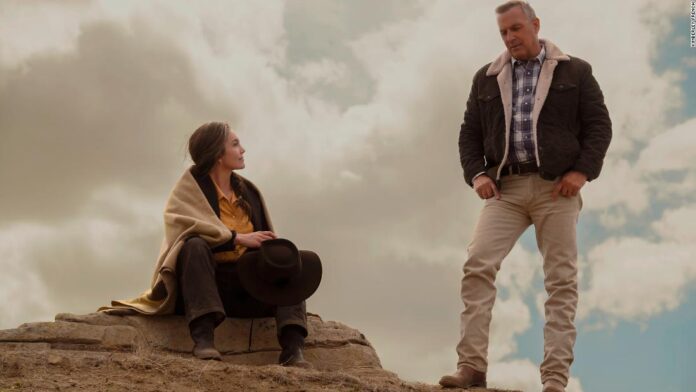 “I’m going to make my way to the mountains whether they’re in the movies or not,” Costner told CNN in a recent interview. “So when a story takes place in the mountains and I think it has the chance to be great, that’s kind of extra juice if you will.”
His latest project is set in North Dakota.
In the movie “Let Him Go,” Costner plays a retired sheriff in search of his grandson. He co-stars with Diane Lane.
“I’ve learned a lot recently about vulnerability and the strength that lies within that and it’s an interesting lesson because I think Kevin Costner posses this as an actor as well,” Lane told CNN. “His appreciation for the vulnerability of his characters. It’s not always about who can be the toughest I think it’s often about who can feel the most, especially in these isolating times we are in.”
It’s the second time they’ve worked together and played husband and wife. Previously, they starred in 2013’s “Man of Steel.”
When it comes to their latest collaboration, she hopes it can give viewers an opportunity to escape, if only for an hour and 54 minutes.
“I’ve been thinking about this movie a lot and how tough it is, it’s a fight for kindness, a fight for good … You know, the news is tough these days … I’m lucky that we got something in the can for 2019 that can be a gift for people in 2020.”
Costner is also gearing up for the fourth season of “Yellowstone,” a hit for the Paramount Network.
“I love open spaces but what has to stand up is the story. I would much rather be outdoors than doing a courtroom drama and I’ve done courtroom dramas, ‘JFK’ and ‘Black or White,’ things like that. But this is probably where I am the most comfortable,” Costner said.