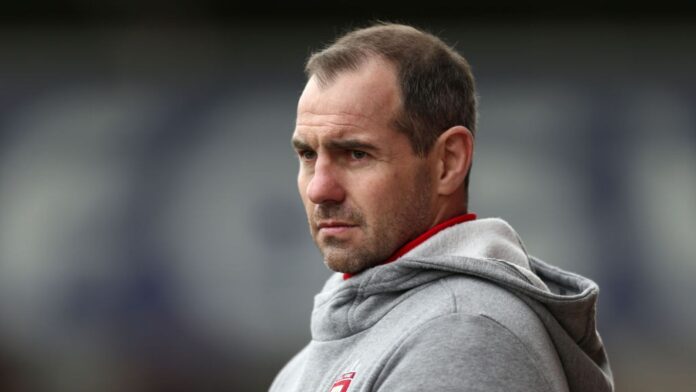 Ian Watson joined Salford from Swinton Lions in 2014; The Red Devils were runners up in the 2020 Challenge Cup Final and 2019 Super League Grand Final; Watson’s deal with the club was due to run to the end of 2022

Salford have begun the search for a new coach after announcing the sudden departure of Ian Watson.

The Red Devils say Watson, who has been at the club since 2014 and in charge for the last five years, has left them with immediate effect after being approached by another Betfred Super League club.

That club is thought to be Huddersfield, who have a vacancy following the departure of Australian Simon Woolford in September.

The news comes just a fortnight after Watson rejected an approach from Hull and pledged to see out his Salford contract, which was due to run to the end of 2022 after he agreed an extension in February.

Watson found himself in demand after taking the unfancied Red Devils to two major finals in 12 months despite operating on one of the lowest budgets in Super League.

Under Watson, Salford played in their maiden Grand Final in October 2019 and a month ago reached the Challenge Cup final for the first time since 1969.

His stock also rose with his appointment as an assistant to Great Britain coach Wayne Bennett on the 2019 tour of New Zealand and Papua New Guinea.

A statement from Salford said: “The club were surprised and disappointed by Watson’s decision yesterday, following his previous statements of intent for the coming season, but understand his desire to continue his development through the experience of a new environment.”

A spokesman confirmed that the club have agreed a compensation deal with the 44-year-old former Wales international.

“Everyone at Salford Red Devils would like to thank Watson for his contribution to the club throughout his tenure and wish him all the best in his new role,” the statement added.

“The club has now started the recruitment process for a new head coach.”