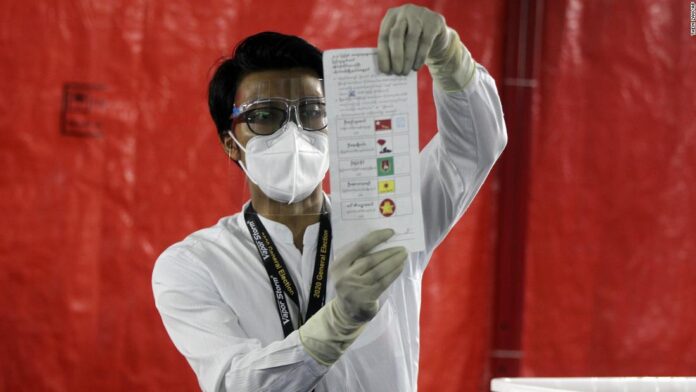 Sunday’s election was viewed as a referendum on the fledgling democratic government led by Nobel laureate Aung San Suu Kyi and her National League for Democracy (NLD), which won a landslide in 2015.
The NLD remains popular at home — but has seen its international reputation battered by accusations of genocide against the ethnic Rohingya Muslim minority. Suu Kyi, too, is no longer viewed as a democracy icon in the West after her handling of the military crackdown on the Rohingya.
After the election, NLD spokesman Myo Nyunt told Reuters it had won many more than the 322 seats in parliament needed to form a government, based on data compiled from reports by party agents at polling stations nationwide — though he gave no specific estimate.
“For the people, for the party, this is such an encouraging election result,” he said, adding that the NLD expected to exceed the total of 390 seats it took in 2015.
The Election Commission had been expected to release results on Monday but had only published a handful by the evening, as candidates and parties posted their own data online.
There were 315 seats up for grabs in the 425-member lower house, and 161 seats in the 217-seat upper house of parliament.
Reuters could not immediately reach a spokesman for the second biggest party, the military-backed Union Solidarity and Development Party (USDP).
The European Union and Britain commended Myanmar for the vote but criticized the disenfranchisement of more than a million voters, including hundreds of thousands of Rohingya Muslims in Rakhine state.
US Secretary of State Mike Pompeo said the polls marked an important step in Myanmar’s democratic transition, though Washington had concerns about the large number of seats reserved for the military and the disfranchisement of groups including the Rohingya.
In a statement, he also expressed concern about the cancellation of voting in parts of several states and regions, and the disqualification of candidates “based on arbitrary application of citizenship and residency requirements.”
Pompeo said Washington would continue to monitor Myanmar’s electoral process closely, and called for tabulation of votes and resolution of complaints to be undertaken “in a transparent and credible manner.”

Some unable to vote

The military, which ruled Myanmar for nearly 50 years until it began withdrawing from civilian politics in 2011, controls a quarter of seats in both houses of parliament under a constitution it drew up and which Suu Kyi wants to amend.
The NLD had been expected to win but with a smaller margin following the emergence of new parties and ethnic minority parties gaining support in some regions.
Political analyst Yan Myo Thein said early results showed ethnic parties had won some seats in Kayah, Mon and Shan states, where many people harbor grievances against the central government, but the overall picture was of another NLD landslide.
The results, he said, “show that the majority of people don’t want…the involvement of the military in politics and the majority of people still continue to recognize and support Aung San Suu Kyi, the leader of the NLD, as their leader.”
In contrast to the wave of optimism that greeted the NLD’s 2015 win, Myanmar held this election amid a surge in Covid-19 infections, economic hardships and escalating ethnic conflicts.
More than a million people were unable to vote after polls were canceled due to insurgencies.
In Rakhine state, where Rohingya Muslims are confined to camps and villages and mostly denied the vote because they are not citizens, the vast majority of polling stations were closed due to fighting between government troops and ethnic insurgents.
Myo Kyaw, general secretary of the Arakan League for Democracy (ALD), said the Rakhine nationalist Arakan National Party (ANP) had won most seats contested in the state.
The Democracy and Human Rights Party, a Rohingya party, said it was “utterly disappointed” that its people had been disenfranchised.
The government does not consider most Rohingya Myanmar citizens but instead migrants from neighboring Bangladesh, even though many can trace family roots back many generations.
The United Nations has said the 2017 military crackdown, which forced 730,000 Rohingya to flee to Bangladesh, had “the hallmarks of genocide.”
More than 740,000 Rohingya fled from Myanmar into neighboring Bangladesh in 2016 and 2017 as the military waged a campaign of violence in Rakhine state. Survivors have recounted harrowing atrocities including gang rape, mass killings, torture and widespread destruction of property at the hands of the army.
Myanmar denies the charges and has long claimed to have been targeting terrorists. Suu Kyi defended her country at the International Court of Justice last year, calling the claims “incomplete and misleading.”