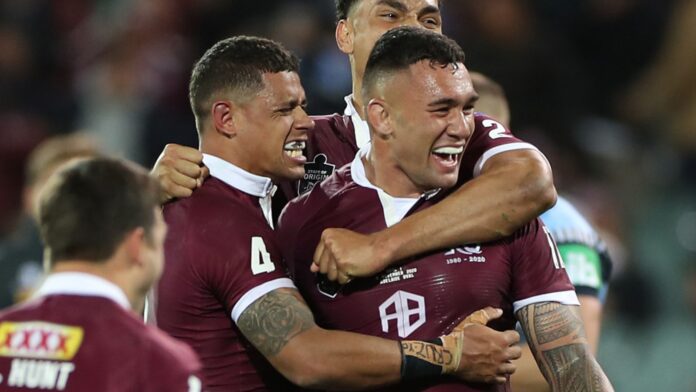 Queensland take a 1-0 lead into the best-of-three series against New South Wales. Watch State of Origin game two at ANZ Stadium live on Sky Sports Arena and Mix on Wednesday from 9.05am, plus the women’s Origin game live on Arena and Mix from 8.40am on Friday

We take a look at what’s being said as Queensland aim to wrap up this year’s series with victory over New South Wales in Sydney on Wednesday, plus a look ahead to Friday’s women’s Origin game…

Queensland head into the match at ANZ Stadium knowing victory would seal their first Origin title since 2017 but are without one of their star performers from last week’s 18-14 victory in the opener.

Try-scoring debutant AJ Brimson suffered a foot injury in the match in Adelaide which has ruled him out of this match, opening the door for Valentine Holmes to make his Origin return for the Maroons at full-back.

The North Queensland Cowboys player last featured in the series two years ago and head coach Wayne Bennett has told Holmes there is no need to put pressure on himself to perform.

“We all know what a good athlete Val is, and we have seen him play some really good football as well,” Bennett said.

“He probably hasn’t played for six weeks. If he keeps it simple that will be his best chance.”

Bennett has been forced into a change it the front row too, with Christian Welch suffering a head injury in game one which sees Dunamis Lui handed a call-up to the team.

The Canberra Raiders prop will be one of the cornerstones of the Maroons pack alongside clubmate Josh Papalli and Lui is grateful for an opportunity he may never have got had it not been for the help and support of some of his childhood friends at school.

“I was pretty close to not even playing rugby league at all,” Lui told NRL.com. “I was always keen to play, especially with all of my friends playing… I just remember my parents saying ‘no’ because they couldn’t afford it.

“Luckily enough, I had two close mates when I was younger, their parents actually looked after me and paid for my fees and got me going. I owe a lot of thanks to them.”

Can Cleary confound the critics?

New South Wales head coach Brad Fittler has made changes to his 17-man matchday squad as the Blues vie to keep their hopes of three successive Origin series triumphs alive on home turf.

Some of those have been enforced, with forwards Boyd Cordner and Cameron Murray suffering injuries, but others like stand-off Luke Keary – who was dropped entirely from the extended 21-man squad – are at Fittler’s discretion.

One player who came in for criticism from some quarters in last week’s defeat who has retained his place is Nathan Cleary, but the Penrith Panthers scrum-half is not worrying about that ahead of the clash in Sydney.

“I didn’t play the way I wanted to [last week], but there is no point dwelling on that,” Cleary said. “It’s just about controlling the future and what to do this week to try to play better in game two.

“We probably haven’t changed too much, it’s just trying to bring a bit more of that x-factor; I’ve got to offer a bit more direction and be more of a dominant voice out there, and try to create some space.”

Statistically, Cleary’s Origin record makes grim reading. In six games he has scored no tries, contributed no assists and not come up with any line-break assists.

But Fittler, who was one of the stand-out halves of his era as a player, is looking beyond the raw numbers and has backed the 22-year-old and Keary’s replacement Cody Walker to come good.

“I think [Cleary] has been performing; I’m not sure what everyone is reading into,” Fittler said. “I’m not that disappointed with him – I know a lot of people seem to be, but I’m seeing a different story.

“Hopefully we get in a good enough position for Cody and Nathan, and our creative players, to show what they can do.”

We break down the attack from #Origin 1 👇🏼 pic.twitter.com/bfS1v3hQdV

Blues women aim for five in a row

The women’s Origin match takes centre stage on Friday and sees New South Wales aiming to extend their winning run to five in the clash at Sunshine Coast Stadium.

The match, which is live on Sky Sports from 8.40am, will feature slightly modified rules to the men’s contest, being played in 35-minute halves and without the ‘six again’ rule being in effect.

A crowd of around 6,000 is expected for the match and NSW half Corban McGregor, who lined up at full-back last year, believes there is plenty of reason for the away side to feel confident.

“I think there are some good combinations within the team, it’s just a matter of tying down a few things with execution,” McGregor told NRL.com.

Hooker Brittany Breayley is backing the Maroons to turn the tables on their rivals in 2020.

“To hear ‘New South Wales’ chanted and not being able to hear anything else is something you don’t want to hear,” Breayley told NRL.com.

“I think it’s well overdue and all the girls are looking forward to doing it for the state and bringing the trophy home.”