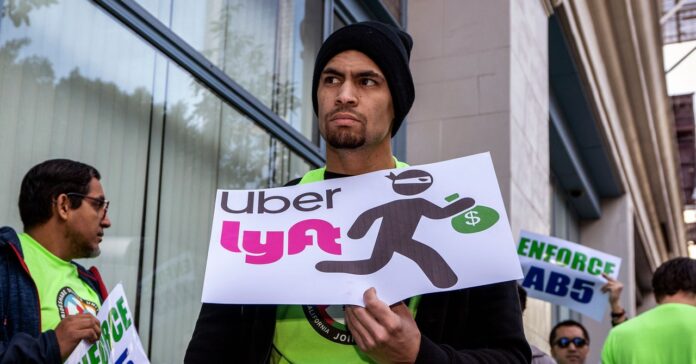 A California law nicknamed the “gig worker law” no longer applies to many of the state’s gig workers. Last week, voters approved a ballot measure named Proposition 22, which gave transportation and delivery companies like Uber, Lyft, and DoorDash permission to keep treating their drivers and delivery people as independent contractors, instead of employees. In piloting and funding the measure—to the tune of $205 million, a state record—the companies neatly sidestepped a more stringent worker classification test that had been approved by the state legislature and state courts.

But AB 5 still exists, and it still covers millions of California workers, says Ken Jacobs, chair of the UC Berkeley Labor Center. They include janitors and other cleaners, retail workers, ground maintenance workers, and truck drivers. (The employers of truck drivers have so far been allowed to continue classifying their workers as contractors, thanks to an ongoing court battle.) This year’s California state budget dedicated more than $20 million to enforcing the new labor law.

AB 5 codified an earlier California Supreme Court decision that created a test to separate independent contractors from employees. According to the test—which is the law in many US states, but is not always enforced in the same ways—workers are only contractors if they’re not under direct control of the company they work for, if they perform work “outside the usual course” of the company’s business, and perform the same kind of work for other companies.

Labor advocates have pledged to continue to fight for California workers they believe are being misclassified by their employers—and denied the wages, protections, and benefits that come along with employment. That includes gig workers at some tech companies.

In September, the civil rights organization Public Rights Project submitted a letter to the California Department of Fair Employment and Housing that detailed alleged misclassification of workers by Handy, a home services booking website. The letter, first reported by The New York Times, detailed alleged incidents of sexual harassment of Handy workers by customers. The Public Rights Project believes Handy would better protect against harassment if it considered its workers employees. Handy didn’t respond to questions about its position on AB 5, but it said in the Times piece that it believed it was exempt from the law. The Public Rights Project is still awaiting the results of the California department’s investigation, says Jenny Montoya Tansey, its policy director.

“Prop. 22 actually covers only ride-hailing and delivery companies, so just a couple of sectors within the gig economy,” says Montoya Tansey. “But there are a number of others that are still subject to AB 5—including home services.”

Thumbtack, which matches personal service workers—in tutoring, personal training, home services, and other fields—with customers, says it doesn’t need to follow AB 5, because it doesn’t set hours or pricing for those on its platform. But its CEO and cofounder, Marco Zappacosta, has been a tech industry outlier, loudly arguing that Prop. 22 is a bad fit for the industry and the state—even if AB 5 isn’t perfect, either. The success of Uber, Lyft, and others in essentially writing their own labor law looks bad, he says, and makes it harder for everyone to engage in good-faith conversations about how to reconfigure regulations so they’re fairer to everyone, workers included. “Prop. 22 takes us further from a fundamental solution and a holistic approach, and sets a terrible precedent,” he says.

Ray Fuentes, an attorney with the labor advocacy group The Partnership for Working Families, expects future California classification battles to focus on workers in janitorial services, home services (like house cleaning), and construction. “Cities will be very interested to root out misclassification for these fly-by-night and smaller businesses, because it hurts the city’s bottom line,” he says. Companies that treat employees as independent contractors don’t pay some payroll taxes, don’t pay into state unemployment insurance programs, and can contribute to gaps in workers’ health insurance coverage. That often leaves local governments to pick up the bill.