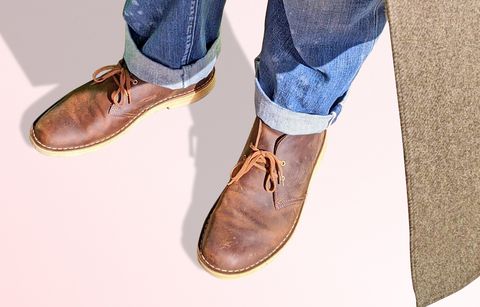 I hate wearing new shoes. Don’t get me wrong: I love getting new shoes. But there’s a special kind of anxious misery that comes with that pristine footwear’s first foray out into the world. I know that, at some point, there will be a scuff. A scrape. A stain. A (shudder) footprint. I’d liken it to taking a brand new car out for the first time, except the first car I ever drove was the same age as I was when I inherited it (lucky 16, baby!), and every car since was similarly pre-loved. The dings were already there. And now I take the subway.

But new shoes, man. Box fresh. Begging to go out into the world, but then, inevitably being done dirty by it. It’s a special kind of vexation. The exact wrong kind of anticipation. So almost a decade and a half ago, when I found myself in an absolute shitshow of a shoe store off Union Square lacing up an absolutely pristine pair of Clarks Originals Desert Boots while tourists clamored for Nikes next to me, I was full of excitement—my first pair of blogger-approved DBs!—but also dread. That I chose the beeswax ones, which show every little crease on their uniquely finished brown leather uppers, was almost an act of self-flagellation. But I was promised they’d age beautifully, so choose them I did. 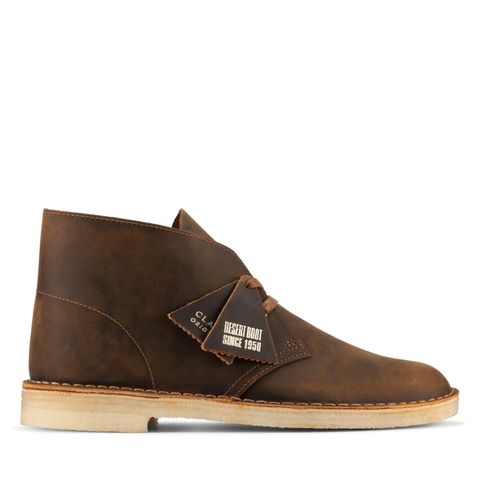 The first mark? It came from the very first step I took wearing them. But that was the “right kind” of mark, made by me with foreknowledge and intention. It was the first scrape—from the edge of a curb that I kicked while walking in the street, because I have very poor spatial awareness and apparently wasn’t particularly worried about traffic—that really hurt. I had sullied something pure. I had Fucked Up My Boots. But then? I kept walking. What else was I going to do?

The scrapes and scuffs and stains after that came from all sorts of places. Did you know there’s a sharp little bit of metal under the front seat of a New York City taxi, the perfect height to slide your toe under without incident getting in, and somehow even more perfect for gouging the ever-loving hell out of that same toe as you twist your foot while stepping out? There is! Those boots met it many times, in many cabs. They also met dropped beer, the undersides of strangers’ soles, and once—I can still feel the impact on my instep—the heel of a pair of stilettos on the subway.

After a while, though, the marks that I initially looked at as obnoxious imperfections started to transform into something else. Once the whole damn upper was covered in nicks and creases and fades, each individual one lost meaning. No longer were these the evidence of mistakes I’d made or stumbles I’d taken, they were, taken together, evidence of a life lived wearing those boots I loved so much. Once, late in their life, a friend I hadn’t seen in awhile—a style obsessive with an encyclopedic knowledge of textile treatments and sewing techniques—asked me if I’d given my boots an acetone rinse. A what? You know, to give the leather that cool, beat-to-hell look. Oh. Nope. All me. 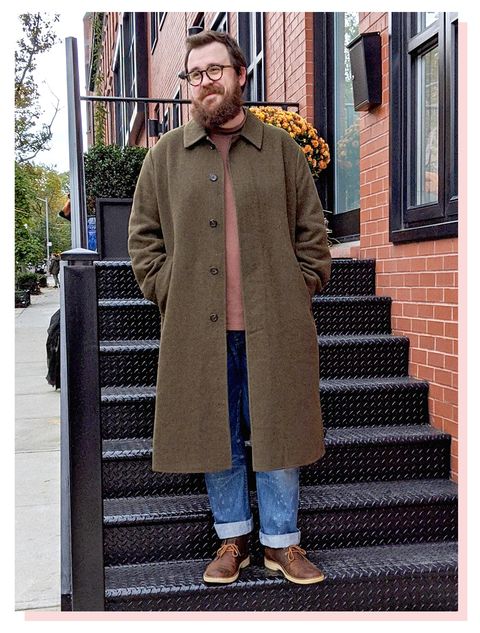 The author, wearing his (latest pair of) Desert Boots.

I may have taken it too far. I wore those boots to a very special place of “well-weathered,” then kept on wearing them way past it. By the time I finally put them out to pasture, you could tell they were ready. And I still get nervy as hell wearing a pair of new shoes for the first time. But if I’m being generous with myself when I put that first, inevitable scrape or scuff on those new shoes, I think of how damn cool my DBs looked after a while. I try to remind myself that the mistakes that lead to those visible imperfections—the accidentally kicked curb, the toe caught under a particularly feisty piece of metal—probably aren’t anywhere near as big a deal as I think they are in the moment. Sometimes, I even succeed. And even when I don’t, I can remember those boots with their evidence of so many mistakes made, and how great they looked because of it. And then I keep walking. Because what else am I going to do?

The Easy Appetizer and Versatile Wines You Need This Thanksgiving