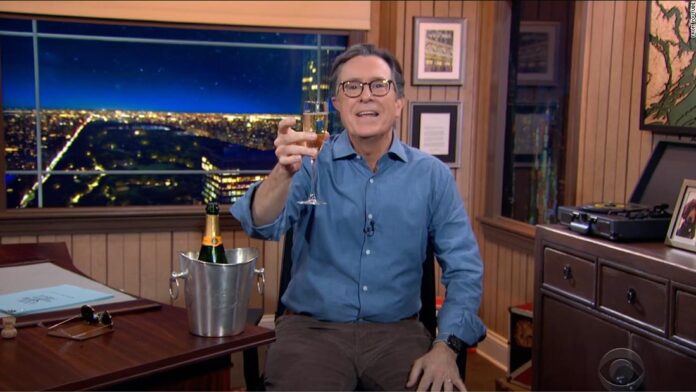 Stephen Colbert, the host of CBS’ “The Late Show,” opened his broadcast with some bubbly as the host celebrated President Trump losing the 2020 election over the weekend.
“After four years, Americans can exhale,” Colbert said. “Unless you’re near other people, then please don’t because of the pandemic.”
Colbert pointed out that Americans across the nation took to the streets on Saturday to celebrate Joe Biden’s victory over Trump.
“Never a good sign when the majority of Americans react to you losing your job the way they did to us getting [Osama] Bin Laden,” he said. “It feels like America is, uh, what’s the word? Great again.”
Colbert said that the last four years have been an “assault on objective reality” and that he is looking forward to getting back to “knowing things again.”
“[Trump] doesn’t want you to know anything. He doesn’t want you to know what causes global warming, how many people showed up to his inauguration, what’s in his taxes, how much his hair costs,” Colbert said. “We’ve spent the last four years debating the value of the enlightenment with a reality show host… The last four years have proven that ignorance is less blissful than advertised.”
[embedded content]
Over on ABC, Jimmy Kimmel said that it took nearly four years but that President Trump finally got “a massive crowd to cheer him outside the White House.”
“What a weekend it was. People were dancing in the streets like Ewoks after they blew up the Death Star,” the host of “Jimmy Kimmel Live!” said. “Darth Tax Invader has been toppled.”
Kimmel pointed out that President Trump was out playing golf when the call for the election happened, calling him “Unhappy Gilmore.”
“I get that this is hard for Donald Trump. Processing a loss like this is going to take time,” he said. I mean this is the first time he’s ever failed at anything besides his casinos, his airline, his mortgage, Trump steaks, Trump University, Trump magazine, Donald Jr., Eric, etc.”
Kimmel said that people are saying that Trump needs time to process the loss.
“And we will give him time,” he said. “January 19th then he’s out. Time’s up on the 20th.”
[embedded content]
On Comedy Central’s “The Daily Show,” Trevor Noah mentioned that even though Biden won, it may take a little bit for Trump’s loss to sink in with some not believing the results.
“You’re telling me that the crafty Democrats have used their satanic powers to steal the election, but for some reason they didn’t steal the Senate?” Noah said. “Because, what? They were using the free version of satanic powers and taking the Senate is a premium feature?”
Noah pointed out that even though Trump lost the popular vote, he still had a shot at winning the Electoral College.
“Like, when you think about this, America’s whole system is rigged to help Donald Trump,” he said. “The man lost by four million popular votes and still had a chance to win the electoral college. How does that make sense?”
Noah added, “The only person Donald Trump should be mad at is himself because he started on third base and still somehow lost the game.”
[embedded content]
And on NBC’s “Late Night,” Seth Meyers said that “our long national acid trip is almost over.”
Meyers added that he’s surprised by how relieved he is that Trump lost.
“We don’t have to suffer through another four years of Donald Trump — the single most annoying human being on the face of the earth,” Meyers said during his “Closer Look” segment on the election. “Even if you put aside everything else about him. The racism, venality, cruelty, corruption, the mendacity, vindictiveness and flagrant disregard for any life but his own. He is still a world historically irritating man.”
[embedded content]
Meyers said that it was hard to look away from Trump these last four years, but he’s happy that he can now move on.
“I mean could you imagine of living through another four years of having to see his sweaty overcooked ham of a face on your television everyday?” Meyers added.