Home Sport Is Rahm’s Masters ace the best hole-in-one ever? 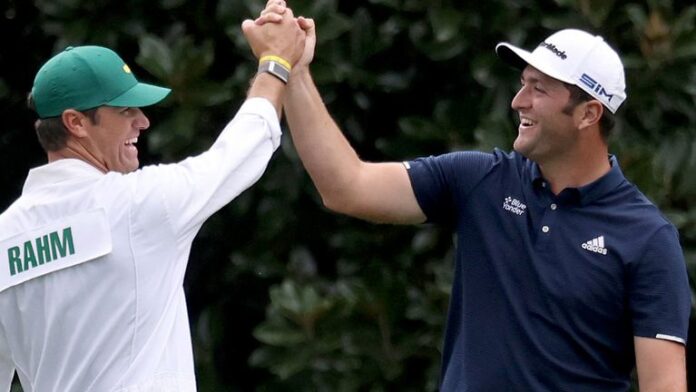 Jon Rahm chasing a maiden major victory at The Masters this week; world No 2 followed a hole-in-one in Monday’s practice round with an incredible ace by skipping his ball over water at Augusta National.

Jon Rahm continued his perfect start to the week at The Masters by making a second hole-in-one in as many days at Augusta National – and his water-skipping effort may be one of the best aces ever!

The world No 2 celebrated an ace during a practice round with Rickie Fowler and Brendon Todd on Monday, striking a perfect five-iron from 205 metres at the par-three fourth to just behind the flag and seeing it spin back into the hole.

Better was to come 24 hours later, on his 26th birthday, where Rahm was once again alongside Fowler as he took part in the traditional pre-tournament skipping challenge on the par-three 16th hole.

Players attempt to hit a tee shot so that it skips as many times as possible across on the water and finishes on the putting surface, with Rahm’s effort on another level and making it a birthday to remember.

The Spaniard’s tee shot took four hops across the water and kicked towards the back of the putting surface, before perfectly feeding down the slope and racing into the hole off the right edge for an unlikely ace.

While no patrons were there around the green to celebrate the incredible ace, Fowler, the two caddies and the marshals watching on around the course were still able to cheer and recognise one of the most remarkable holes-in-over ever seen at Augusta National.

Click on the video above to see Rahm’s water-skipping ace!

When’s The Masters on Sky Sports?

Rahm will be part of Thursday’s Featured Group coverage at The Masters as he is grouped alongside pre-tournament favourite Bryson DeChambeau and former major champion Louis Oosthuizen.