Home World Who Were the Ancient Sumerians? 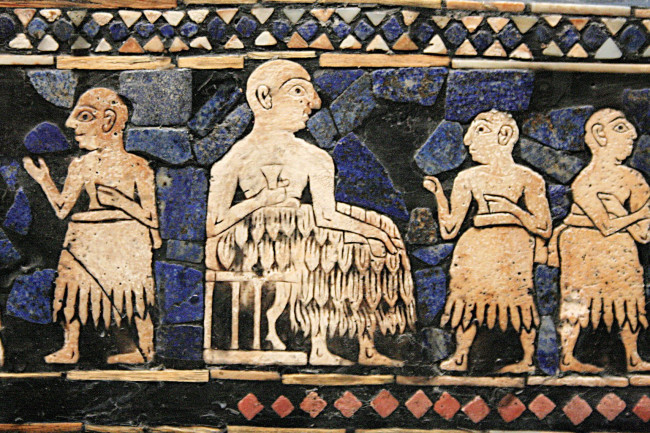 The ancient Sumerians created one of humanity’s first great civilizations. Their homeland in Mesopotamia, called Sumer, emerged roughly 6,000 years ago along the floodplains between the Tigris and Euphrates rivers in present-day Iraq and Syria.

The Sumerians learned to farm on a grand scale in the so-called Fertile Crescent, a thin, crescent-shaped sliver of Mesopotamia often tied to the dawn of farming, writing, mathematics and astronomy.

And while the arid, ancient landscapes of the Middle East may not seem like the most likely location for an agricultural breakthrough, Sumer actually had a massive advantage. By settling between two large rivers, the Sumerians benefited from rich floodplain soil and ample water to irrigate crops. Their success was accelerated by Sumerian technological innovations like canals and plows. With time, Sumer got so good at growing food that they started to have enough resources left over to focus on building the cities and temples. 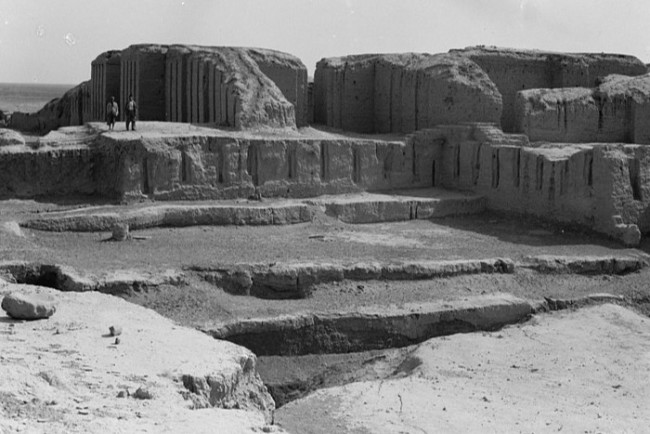 Roughly 10,000 years ago, villages started popping up across Mesopotamia. The people who lived in the region raised animals and grew grains, even as they continued to hunt and gather. Over time, those villages expanded and their people became increasingly dependent on farming.

Archaeologists still aren’t sure exactly what life was like for these early cultures. However, similarities in pottery styles and stamp seals placed on a variety of containers suggests some level of administrative control emerged between 6,000 and 7,000 years ago.

Meanwhile, people started constructing a series of temples using mud bricks at a site called Eridu. The city seems to have been founded around 5400 B.C. and it was occupied for thousands of years until it was finally abandoned for good around 600 B.C.

Eridu’s status was legendary even in ancient times. Babylonians actually believed that Eridu was the oldest city on Earth, having been created by the gods themselves. That kind of reverence attracted modern researchers, too. Even before archaeologists discovered Eridu, they had read about its existence in ancient texts.

“After kinship had descended from heaven, Eridu became (the seat) of kingship,” one Sumerian tablet reads.

The area around Eridu was excavated a handful of times between the mid-19th century and the mid-20th century, turning up the remains of a once-sprawling metropolis that saw successive buildings constructed on the remains of temples and other structures that had come before.

Those digs did confirm Eridu as a real and truly ancient metropolis. At around 7,400 years old, Eridu is among humanity’s oldest cities, but nowhere near the oldest. The current favorite contender for Earth’s first city is Çatalhöyük, which sat just north of the commonly accepted edge of the Fertile Crescent in modern-day Turkey. Çatalhöyük was founded 9,600 years ago and also survived for millennia, disappearing just centuries before Eridu was founded.

However, Eridu was just the beginning of Sumer. The civilization quickly grew to include dozens of cities, like Ur, Kish and Uruk. As Sumerian cities exploded in size, Sumer emerged as one of the world’s first great agricultural societies. In time, Eridu would fade in influence and Uruk would take on an outsized role. At its height some 4,800 years ago, Uruk was the largest city in the world. Some estimates suggest the city held as many as 80,000 people at a time when the total human population was somewhere around 15 million. 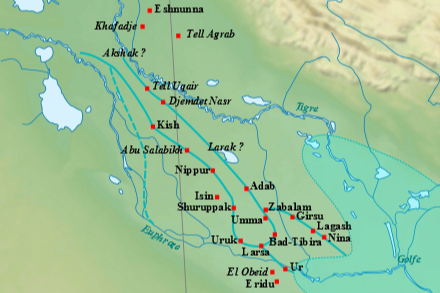 A map of the cities of ancient Sumer, which covered much of modern-day Iraq. (Credit: Wikimedia Commons)

Innovation was one of the key factors in the Sumerians’ efforts to turn the desert into an oasis. And one of their most beneficial innovations was also among the simplest: the plow.

The first plow appeared about 3500 B.C. And by 1500 B.C., the Sumerians had also invented a seeder plow, which let farmers use beasts of burden to till and plant at the same time. The devices even came with instructions, courtesy of the Sumerian Farmer’s Almanac, which told farmers how to boost their crop yields thanks to tilling and irrigation.

All the efficiencies helped support a growing population, as well as a growing system of rulers and religion. And as their cities grew, so did their efforts in writing, math and religion. As far back as 5,000 years ago, the Sumerians had developed cuneiform, one of the earliest forms of writing. Sumerian inscriptions on clay and stone tracked the trade and movement of grain and other goods, recorded Sumerian history, and even included cooking recipes and pornography. Thousands of Sumerian tablets still sit awaiting translation in museums around the world. The Sumerians also invented or utilized a wide-array of other more modern seeming innovations like wheeled chariots, the 60-minute hour, and even possibly the first written work of literature — The Epic of Gilgamesh. 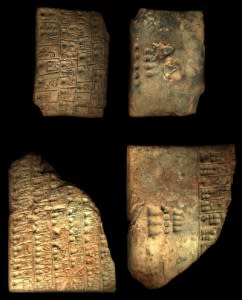 These proto-cuneiform tablets were discovered at the Sumerian city of Uruk. (Credit: CDLI:Wiki)

One clay tablet discovered at Eridu, as well as others found elsewhere in Sumer, also tells a flood story about a deluge that mirrors the one found in the Bible’s Old Testament. Biblical historians call it “The Eridu Genesis” story. According to the tablets, it was the gods who first told humans to take up living in cities in Sumer. But eventually, the gods decided to wipe out the human race with a deluge. According to the myth, one particular god, Enki, tipped off a Sumerian king named Ziusudra that he should build a boat to save his people.

The idea that the flood story would’ve been passed down from the Sumerians makes sense for other reasons, too. In modern times, Sumer has captivated everyone from archaeologists to ancient alien conspiracy theorists. But the fascination with Sumerian society goes back much further in human history. Both the Babylonian and Assyrian empires, which rose to control parts of the Middle East as Sumer faded away, continued using the Sumerian language in their religious rituals for millennia. Excavations of Babylonian homes have uncovered tablets inscribed with the Sumerian language from long after the civilization itself was gone.

And the Babylonians, who created the first star maps, seem to have inherited some of their knowledge of astronomy from the Sumerians as well. The Babylonian people had two sets of constellations — one for tracking farming dates and another to recognize the gods. The latter was passed onto us today thanks to the Greeks and formed the foundations for the 12 zodiac constellations. And the star names that they used seem to date back to the Sumerian people, implying this ancient civilization had a seriously sophisticated knowledge of much more than the Earth below their feet.

So, while the Sumerians may have disappeared thousands of years ago, their influence and intrigue has continued on into the present, shaping aspects of modern society we all take for granted today.