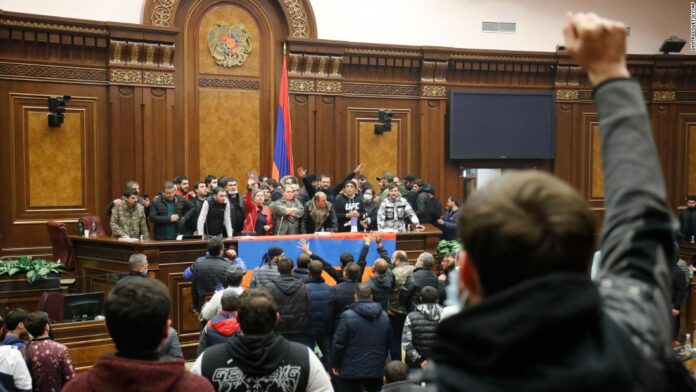 “I have made a difficult, extremely difficult decision for personally me and all of us. I have signed a declaration with the Presidents of Russia and Azerbaijan on stopping the war starting from 01:00 (local time),” Pashinyan said in a statement posted on his Facebook page early Tuesday.
After claiming earlier on Monday that the fight over Shusha was not over, Pashinyan said he made the decision to sign the agreement based on a deep analysis of the military situation and “on the conviction that in the existing situation this is the best possible outcome.“
Speaking after the agreement was announced, Azerbaijan President Ilham Aliyev said the deal would “return our territories without any further bloodshed.” He said all military operations in the region that sits in Azerbaijani territory but has been populated and controlled by ethnic Armenians have stopped.
“Today, I am signing this agreement with pride! Congratulations to the people of Azerbaijan!,” Aliyev added.
Russian President Vladimir Putin said Russian peacekeeping forces will be deployed along the contact line in Nagorno-Karabakh and within the corridor that connects the region with Armenia.
He said the ceasefire deal stipulates the exchange of prisoners of war and bodies, according to the Russian official news agency, TASS. Russia neighbors Azerbaijan, but has a security alliance with Armenia. Moscow had tried to broker a ceasefire several times in the past few weeks, but each agreement fell apart within a short time.
Aliyev declared Sunday that his forces had taken Shusha, a city sometimes described as “the Jerusalem of Nagorno-Karabakh” for its religious significance.
Azerbaijan’s defense ministry released a video Monday showing the country’s flag flying on public buildings in the city, putting Azerbaijani forces mere miles from the regional capital Stepanakert. The video shows deserted streets and damaged buildings.
Later on Monday, Azerbaijan apologized for downing a Russian helicopter near the Armenia-Azerbaijan border, saying it was an accident.
Shusha — or Shushi as it’s known to Armenians — lies some 10 kilometers south of Stepanakert and is on higher ground, making the capital more vulnerable. It has already suffered regular rocket and missile attacks; many civilians fled towards Armenia over the weekend.
The first Armenian acknowledgement that Shusha had fallen came Monday from the spokesman for Nagorno-Karabakh’s presidency, Vahram Poghosyan. He posted on Facebook that the “city is completely out of our control and all kinds of encouraging or inspiring propaganda do[es] not give us anything besides losing the sense of reality.” Poghosyan added that “the enemy is in the vicinity of Stepanakert and now the existence of the capital city is threatened.”
Videos posted on social media Sunday showed convoys of cars heading away from Stepanakert, but reports from the city say many civilians remain there.
Hours after Azerbaijan’s defense ministry posted the Shusha video online, the Russian defense ministry said a Russian military helicopter was shot down over Armenia near the border with Azerbaijan.
The helicopter was downed using a portable surface-to-air missile, the ministry said, adding that two crew members were killed when the Mi-24 crashed in a mountainous area in Armenia and a third was taken to an airfield with injuries.
Azerbaijan’s foreign ministry later issued a statement apologizing for the downing of the helicopter, which it said was an accident.
“The Azerbaijani side apologizes to the Russian side in connection with this tragic incident, which is accidental and was not directed against the Russian side,” the statement said. The statement went on to express Azerbaijan’s “sincere condolences” to the families of the Russian crew members and offered to pay compensation.
“The helicopter flight took place in close proximity to the Armenian-Azerbaijani state border, while active military clashes continue in the zone of the Armenia-Azerbaijan Nagorno-Karabakh conflict,” the Azerbaijani statement said.
“The flight took place in the dark, at low altitude, outside the air defense radar detection zone. Russian Air Force helicopters have not been seen in the specified area before,” it added.
Turkish President Recep Tayyip Erdogan — a vocal supporter of Azerbaijan — told a rally in the Turkish city of Kocaeli on Sunday that “the liberation of Shusha also signals that liberation of remaining occupied territories is near.”
In a call with Putin on Saturday, Erdogan said Armenia must withdraw from the Azerbaijani lands under its occupation, according to a read-out of the call from the Turkish presidency.
The unrest in Nagorno-Karabakh dates back to the collapse of the Soviet Union, when the region, backed by Armenia, declared independence from Azerbaijan.
Shusha was captured by Armenian forces in 1992 and Nagorno-Karabakh established a de facto independence that is not recognized by most of the world. A 1994 ceasefire brought the violent conflict over the enclave to an end, but tensions continued to simmer.
Azerbaijan has long claimed it would retake the territory, which is internationally recognized as Azerbaijani. Tensions flared up again over the summer and escalated in September.
Both sides have reported dozens of civilian casualties since the conflict began in September.