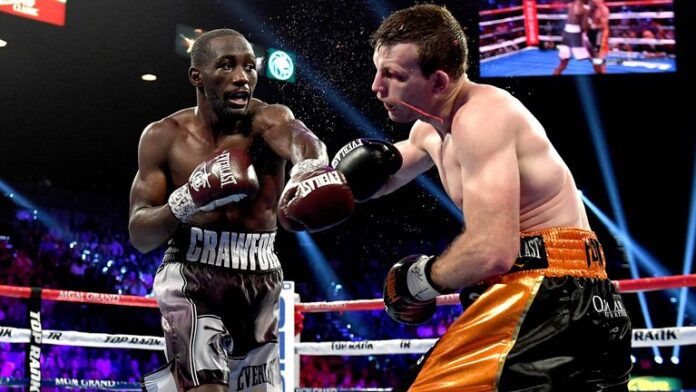 Terence Crawford: “I go into the ring knowing that, on any given day, any fighter can lose. I don’t carry myself as unbeatable”; Triple-header of women’s world title fights on Saturday, live on Sky Sports, to be streamed free on YouTube, Facebook and skysports.com

Only when Terence Crawford stopped expressing his inner torment by trying to hurt people in the ring did he truly become the force we see today, more capable than ever of inflicting damage and wrecking dreams.

If there is a colder, more calculating, more vicious individual in boxing than the man they call ‘Bud’ then speak up now. No? Anybody? Crawford is uniquely terrifying, there is darkness behind his eyes and a comfort that is alarming when he describes how to break a rival’s body down.

This is the man that Kell Brook has chased and will now challenge. You know what they say about being careful what you wish for…

It was as Crawford raced through the streets of Omaha, Nebraska towards hospital, blood pouring down his neck, that he realised his life had to change.

That’s one story. There are seven more, he guesses, that involve a bullet.

Crawford was raised in a bad part of town by a mother with an angry streak and an often-absent father who was in the Navy. He found boxing very early but also didn’t say goodbye to the street life until it was nearly too late.

That night sat in hospital? Revenge was on his mind but the decision not to seek it has ultimately defined Crawford’s life.

Boxing ultimately became the place where he unleashed his turmoil – today he possesses a 36-0 record, he is a three-weight world champion including becoming undisputed at super-lightweight, is regarded as arguably the world’s top boxer and will defend his WBO welterweight title against Brook in Las Vegas on Saturday.

Crawford is one of boxing’s most thrilling finishers – not necessarily a one-punch KO artist, but more of an animal stalking its wounded victim.

The body shot that crumpled Julius Indongo, the beatdown of Jeff Horn, the destruction of Amir Khan – opponents have a habit of turning away from Crawford in the final moments before they are saved from more pain.

He is exhilarating and frightening in these moments, and just as chilling when he explains it.

“Instincts take over and energy levels rise. That’s something you are born with,” he tells Sky Sports about the moment he knows an opponent is hurt.

“I don’t think it’s something you can teach.

“It’s hard to explain that. It’s just a feeling you get in your stomach. You have to push a little harder, step to them a little more.

“A lot of boxers have it; that’s how we get the knockouts that fans love to see; it’s because we can sense a hurt prey when we’re on the prowl.”

Not a lot of boxers possess the type of ruthless instinct that Brook must overcome this weekend.

But Crawford has mellowed. Sort of.

His old life will always be a part of him but he is now a 32-year-old father of five and an experienced champion who doesn’t obsess about chasing highlight reel moments inside the ring.

“My fight style and my mind-set? Do whatever it takes to win a fight. That’s it,” he says.

“Whether it’s out-point them or out-slug them or knocking them out. Do what you’ve got to do to win the fight.”

Was he more reckless in his younger, angrier days?

“Yes, I’m sure every boxer was more reckless when they started. Once you get comfortable and settle down? You reach a point where things just slow down inside the ring.

“I’m more experienced, more mature. That’s how I feel. I’m a totally different fighter to when I started. Better all around – I’m seasoned, stronger, smarter.”

These days Crawford is as likely to be carrying out charity work in Africa as he is relaxing at home playing Call of Duty. He does a lot for the underprivileged in his old community in Omaha, where he still lives, and is also a collector of classic cars.

This is now a mature champion whose old life is a thing of the past but it makes him more dangerous to future opponents.

Has he seen everything there is to see inside the ring?

“Me, personally? Yes. But you never know. Strange things happen.”

Crawford’s unbeaten record has scarcely been threatened yet but he insists: “A lot of fights have been difficult for me. They may not look difficult from the outside. But every fighter poses a different threat and they all feel different.”

There might be a better fighter on the planet, but there certainly isn’t as many as three or four.

Saul ‘Canelo’ Alvarez and Naoya Inoue are frequently and justly mentioned among the pound-for-pound elite but Crawford’s accomplishments place him in that conversation too.

Vasiliy Lomachenko has been demoted after his defeat to Teofimo Lopez but Crawford’s assessment was scathing: “That’s not the first time he lost. He was already capable of losing.

“I go into the ring knowing that, on any given day, any fighter can lose. I don’t carry myself as unbeatable. I just do everything in my power to make sure I don’t lose.”

Suddenly a topic has arisen which has frustrated Crawford. He laughs sarcastically when asked why he isn’t unanimously named the world’s No 1 boxer.

“I don’t know, I don’t know. It’s just opinions, at the end of the day,” he smiles through gritted teeth.

“I don’t worry about those type of things.”

His tone of voice makes his words difficult to believe.

“I get the credit,” he says. “When my career is over and people look back? They will give me credit.”

But then Crawford contradicts himself, showing annoyance at the debate: “I don’t believe they will give me the credit until I beat somebody like Canelo, 10 weight classes above me!

“I don’t worry about these type of things.”

“Now here I am, but they still want me to move up to the next weight class if I don’t get the Errol Spence Jr fight.

“This is a never-satisfied sport.”

The clear criticism of Crawford, which isn’t necessarily his fault, is the perception that he lacks a standout result on his record.

He mentioned the name of Spence Jr before he was even asked.

Spence Jr, a fellow unbeaten American, holds the IBF and WBC belts but a collision course has been delayed after he was involved in a major car crash. He will return next month against Danny Garcia.

So can Brook cause an upset that would rank alongside the greatest of any Brits on foreign soil?

“I can box orthodox, southpaw, I have balance and timing, I’m a big welterweight,” said the Sheffield man, a former IBF champion.

“I’m a scary fighter, I’m dangerous for any fighter in any weight division.”

He mocked his rival Amir Khan’s effort against Crawford by saying: “I won’t be looking for no way out.”

But Brook arrives without long-term trainer Dominic Ingle or promoter Eddie Hearn by his side. In his corner will be Carlos Formento, a trainer from the Canary Islands who Brook met on Instagram.

Brook has only lost twice in 41 fights but they left a mark – each of the orbital bones in his face were broken by Gennadiy Golovkin and Spence Jr.

It is a marvel, in that respect, that Brook is still vying at this level in a fight that he personally sought by accosting Crawford’s promoter Bob Arum.

Brook has, remember, won a world title in the US against an unbeaten American once before.

“I watched that fight,” Crawford scorned. “But me and Shawn Porter have completely different styles.”

The hours count down before Brook comes face to face with the harsh eyes of Crawford.

“The face-off ain’t nothin’,” Crawford insists. “It’s about when that bell rings.”

When it does, Brook will find himself up against a challenge as steep as anything that exists in the boxing world today.