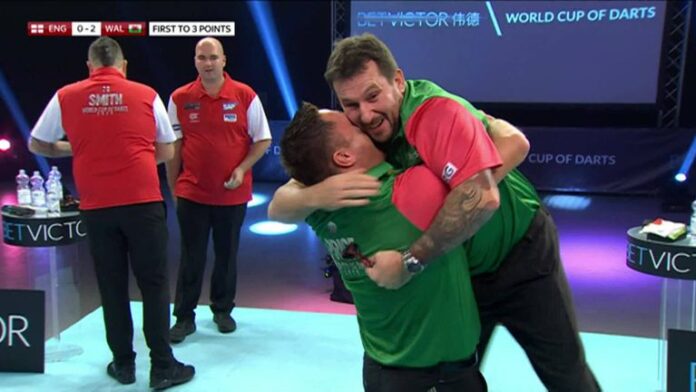 Wales became World Cup of Darts champions for the first time ever as Gerwyn Price and Jonny Clayton brushed aside England’s Michael Smith and Rob Cross in the final in Austria to secure the £70,000 top prize

Wayne Mardle is keen to see paired darts become more prominent on the back of another highly-entertaining World Cup campaign over the weekend.

An inspired duo of Gerwyn Price and Jonny Clayton whitewashed England’s Michael Smith and Rob Cross in the final as Wales became World Cup of Darts champions for the first time in their history.

Mardle believes alterations to the doubles format could add even more drama to a tournament that continues to improve each year.

“I was speaking to [Sky Sports Darts producer] Rory Hopkins about this, he came up with a brilliant format,” said Mardle. “As we know it’s all scheduled towards TV so just pairs, as was highlighted to me, just wouldn’t work.

“The pairs format would have to be too long. This is a good idea from Rory, I’m not taking any credit here whatsoever, I’m just passing it on.

“What he said was that instead of having single, single, pair from the last 16 onwards, you have single, pair, single. Now what that means is that you just do the draw as you would for the singles, but the pairs, because it’s the second game, it’s either to win or to avoid defeat.

“That way it’s the same time format, the format effectively hasn’t changed in terms of the time it would take the game. All we’ve done is move the pairs second from the decider, but it could be a decider in so many ways anyway. I like that. So there would be a pairs match in every single game.”

Mardle believes the prospect of rearranging the order of play comes with the potential of adding even more intrigue should contests come down to a decisive singles game.

“Let’s say it’s England v Austria. So (Rob) Cross goes on against Mensur Suljovic and Mensur beats Rob, so they’re 1-0 up. Then you’ve got the pairs game and it will be Rowby-John Rodriguez taking on Michael Smith if it goes to the single.

“You have got Rowby-John Rodriguez and he’s got three darts in hand to put Austria through because Mensur has already done a number on Cross.

“He misses, it goes 1-1 and he’s now got to stay on that stage, pick himself up and play a singles game. The drama of it all. A man would look beaten before he’s beat, he’s still got another game to play.

“And the story will be that he kind of picks himself up off the ground after missing three darts to put his country through and still has the strength of mind to beat whoever it may be to go through. It doesn’t muck around with the time constraints of broadcasting and that’s the problem.

“Imagine you’ve just missed darts to put your country through and you’ve got to stay up there. We want pairs and we would get it in every single tie.”