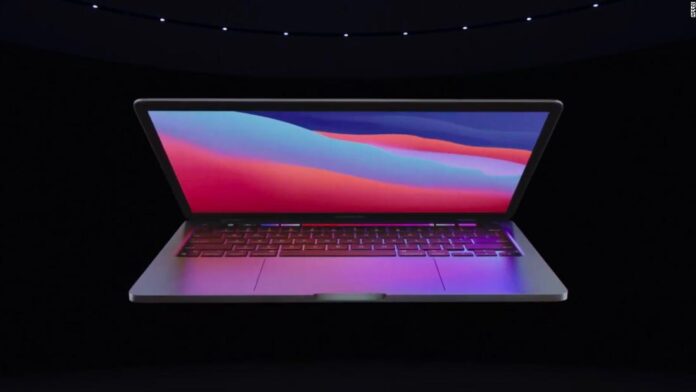 Apple first teased the new chips at its Worldwide Developers Conference in June, with CEO Tim Cook saying it would launch the first computers powered by them by the end of the year and complete the entire transition within two years.
The company’s first in-house Mac chip, based on the A-series chips it’s been using in iPhones and iPads for years, is called M1. Cook described it as “by far the most powerful chip that we have ever created.”
The company unveiled three new devices powered by the M1 chips.

Apple used the new chips to reboot one of its most popular laptops.
The new 13-inch MacBook Air was the first device Apple unveiled powered by the new M1 chip, which the company claims will make it “up to three and a half times faster” than previous models — and up to three times faster than a comparable Windows laptop.
The smaller size and greater efficiency of the chip also allowed Apple to remove the fan that keeps its laptops cool, with the company boasting that the new Air is “completely silent.”
The new MacBook Air will start at $999.

Apple is also adding the new chip to one of its higher-end models.
The M1 will now power the 13-inch MacBook Pro, the company announced Tuesday, further enhancing its performance and speed. Other features enabled by the new chip include faster playback for 8K video and better machine learning capabilities.
The new chips also allow for what Apple says is “the longest battery life ever in a Mac.” The new Pro is capable of 17 hours of web browsing and 20 hours of video playback.
The new MacBook Pro will cost $1,199.
The final new device to be powered by the in-house chips is Apple’s compact desktop computer, the Mac mini.
The $699 desktop system, equipped with USB-C ports that allow it to connect to a display of your choosing, offers a higher performance alternative to users who prefer to work on larger monitors and need their computers to do more heavy lifting than a laptop can.
Pre-orders for all three devices open on Tuesday, and all of them will go on sale next week.

The new chips could be a big deal

Analysts say the move to its own chips will give Apple and its users several advantages, including improved performance and battery life. Since Apple already uses its in-house chips in the iPhone and iPad, bringing that capability to its Mac lineup will give Apple more control over updates and user experience, and allow apps to work more seamlessly between the devices.
Apple said on Tuesday that its computers powered by M1 and running Apple’s new Big Sur operating system will be able to integrate better with other Apple devices, allowing iPhone and iPad apps to be used on the Mac.
The chips are also smaller and more efficient, analysts say, meaning they could make the Mac lineup physically sleeker and thinner going forward. And using similar chips in iPhones and Macs, particularly with the growth of 5G networks also opens up the possibility of a laptop with cellular connectivity down the line — though Apple hasn’t yet made any specific commitments on that front.