Home World This 81-year-old Italian man couldn’t visit his wife in hospital, so he... 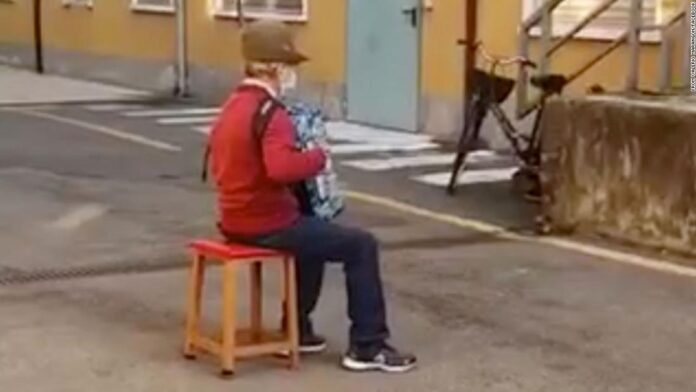 Prevented from visiting his sick wife in hospital, 81-year-old Stefano Bozzini decided to take to the street outside to serenade her on his accordion.
The touching moment was captured on film and has since gone viral.
While Carla Sacchi, his wife of 47 years, watched from a second-floor window of the hospital in Castel San Giovanni, a town in Italy’s northern Emilia-Romagna region, the sprightly troubadour played a medley of love songs on his accordion below.
[embedded content]
He opened with “Spanish Eyes” by Engelbert Humperdinck, before playing a selection of his wife’s favorites.
Wearing a red sweater, navy pants, a feathered hat and a mask, Bozzini played enthusiastically, while his wife and two others — all in face coverings — watched from above.
Bozzini can be seen tapping his foot as he plays, then waves to his wife at the end of the performance.
A man can be heard speaking Italian in the background, saying “bravo” and “how beautiful, this man is serenading his wife who is in the hospital.”
The hospital does not treat patients with Covid-19, but visitors are not allowed to enter the building because of restrictions imposed in response to the pandemic.
According to the Italian news agency ANSA, Bozzini is a retired member of the Italian army’s Alpini mountain infantry, and the hat is part of the uniform.
His unit nicknamed him “Gianni Morandi of the Alpines” as he was always playing the accordion, ANSA reported, and the couple were married in 1973.
The uplifting tale has gone viral on social media, with Bozzini’s daughter writing on Facebook: “That is my daddy….the one and only.”

The Mystery of Male Pregnancy and Birth in Seahorses