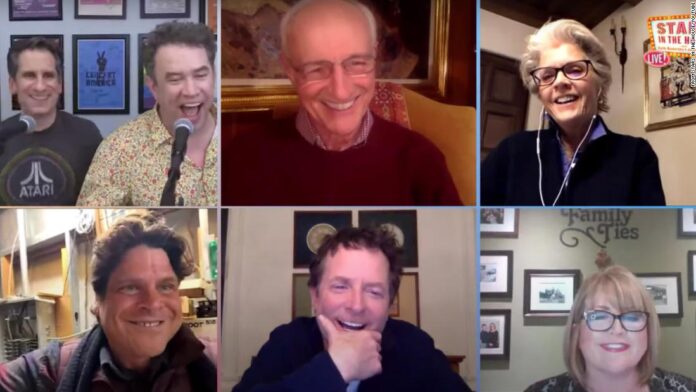 The cast of the beloved 1980s NBC sitcom, including Michael J. Fox (Alex P. Keaton), Meredith Baxter (Elyse Keaton), Michael Gross (Steven Keaton), Tina Yothers (Jennifer Keaton). Marc Price (Irwin “Skippy” Handelman), Scott Valentine (Nick Moore) and Brian Bonsall (Andrew “Andy” Keaton), all joined virtually. The reunion was hosted by Seth Rudetsky and James Wesley.
Gross talked the political side of the series centered on the Keaton family, with liberal parents and their conservative Republican son, Alex P. Keaton, played by Fox.
“I just want to say one thing and that is, I loved the time that we were together. I think as you’ll all agree, a kinder, gentler politics,” Gross said, adding that the Keaton family “hammered out our compromises in the family and I think that’s one of the things that people loved about us.”
Yothers added that America’s political divide is different now.
“I’m trying to raise a 13-year-old and a 15-year-old and trying to navigate them through our democracy and how to make this work and it’s been really difficult to try to set the example with what’s been going on. It’s really unfortunate,” she said. “My daughter is going to vote in the next election, so I want her to get a feel of what America’s about. So, we need to definitely come back to the Keaton’s kitchen table.”
Baxter added, “Yeah, ’cause this show could not have, would not survive now.”
Yothers argued that, “It would! It would! We have family members that are on different pages and we do get along.”
And Gross added, “I think people want a show like this.”
“Family Ties” joins the casts that have reunited for “Stars in the House” to raise money to help those in need during the Covid-19 pandemic.