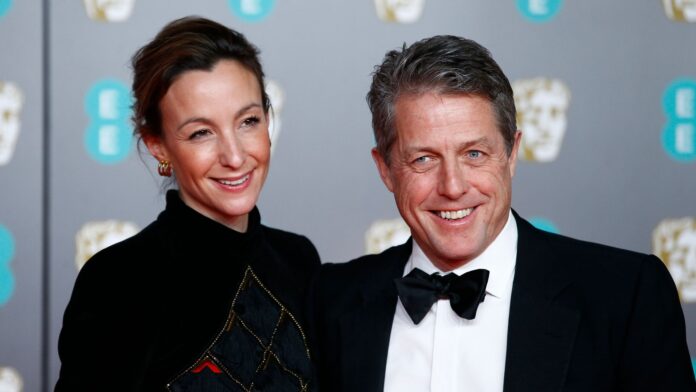 Hugh Grant has revealed he had coronavirus in February and says he “started to panic” after realising he could not smell anything when he sprayed perfume in his face.

Speaking to The Late Show with Stephen Colbert, the British actor, 60, said: “My wife and I had it – way back in the winter.

“I have antibodies, I’m rather proud of them, so we’re not going to get it, I don’t think,” he said, adding that he had an antibody test “only a month ago”.

“I still have those antibodies, so I know that’s what it was,” he continued.

Grant, who shares three children with Swedish TV producer Anna Eberstein, said it “started as just a very strange syndrome where I kept breaking into a terrible sweat” and then made a bizarre reference to disgraced Hollywood producer Harvey Weinstein.

He said: “It was like a poncho of sweat, embarrassing really.

“Then my eyeballs felt about three sizes too big and this feeling as though an enormous man was sitting on my chest – Harvey Weinstein or someone.

“I thought I don’t know what this is. Then I was walking down the street one day and I thought I can’t smell a damn thing and you start to panic.

“By then people were just starting to talk about this as a symptom.

Grant reveals that he began to get “more and more desperate” when he could not smell anything when smelling flowers.

“I started sniffing in garbage cans. You know, you want to sniff strangers’ armpits because you just can’t smell anything.

“I eventually went home and I sprayed my wife’s Chanel No. 5 directly into my face. Couldn’t smell a thing, but I did go blind.”

Grant also told the US comedian and talk show host that he had been playing with Barbie dolls with his children while in quarantine.

He said: “To start with I think I’m just being nice and then I realised even after my girls went to bed I’m still playing with the Barbies.

“I enjoyed making them fall in love, they became very fond of each other, these two Barbies.

“I took photos of them kissing each other and sent them to friends, this is what happens in a very long lockdown.”

Grant can currently be seen in thriller The Undoing, alongside Nicole Kidman, on Sky Atlantic.