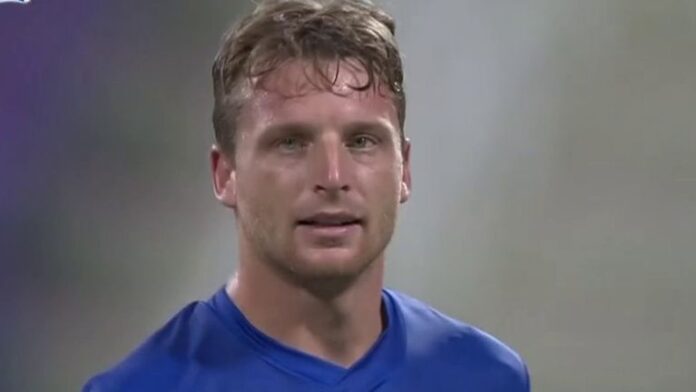 Jos Buttler says he prefers opening the batting in T20 cricket – but that it was his idea to move down the order for Rajasthan Royals during the 2020 IPL.

England star Buttler began the tournament in an opening berth, a spot where he averages 40.62 in his IPL career with 10 fifties in 31 innings.

However, the 30-year-old then slotted down into the middle, from where he averages 26.75 in 26 innings, after telling management that he felt his struggling side – who ended up finishing bottom of the IPL table on net run-rate – needed more experience later on in the innings.

Speaking to Rob Key and Nasser Hussain on Sky Sports’ IPL Cricket Show, Buttler said: “I see it as bat wherever the team requires you to bat, and however the balance looks best in certain sides.

“I do feel for myself – and I think 90 per cent of people who play T20 would say it as well – that the top of the order is the place to bat.

“It’s where you face the most balls and where I think I can impact the game most. I think I have had more success at the top of the order and impacted more games in a positive way.”

On slipping down the order, Buttler – who hit 328 runs in 13 innings this season with two fifties and a top-score of 70 not out – added: “It was a discussion and it probably came from myself saying I didn’t think our team had the right balance.

“It felt like there were a couple of games we didn’t quite close out when we were in good positions. I felt like if we had had a bit more experience in that position then maybe we would have got over the line.

“It was an offering, really, from myself to say ‘I haven’t had the runs I’d have liked at the top and I’m quite happy to move’. I thought for our team, it looked a better balance having a more experienced player in the middle.

“I’d say [my form] was average, I guess – it pretty much mirrored the side. I had plenty of starts, felt I got in, but never really extended my innings.

“I had a couple of decent knocks but with the expectations I put on myself, I didn’t get to where I wanted to be.”

Buttler will soon link up with England in South Africa for the T20I and ODI series against the Proteas, with the first of three T20Is taking place in Cape Town on November 27.

The wicketkeeper-batsman will come up against two South African bowlers who starred for Delhi Capitals in the IPL – Kagiso Rabada and Anrich Nortje.

Rabada was the leading wicket-taker in the tournament with 30 scalps, while Nortje bowled the fastest ball in IPL history to Buttler when Delhi faced Rajasthan in October, hitting 97.1mph.

Buttler added: “Rabada has the ability to take the ball away from the right-hander.

“When guys come at you at pace, you assume they will bowl good length or back of a length and attack you with a short ball but he is a brilliant yorker bowler with the brand new ball.

“He bowls full and attacks the stumps and can beat you with his air speed.

“Nortje is skiddy and reminds me of Mark Wood, actually. He is aggressive, at your stumps and runs in and gives his all. In South Africa, him and Rabada will be a great challenge.”