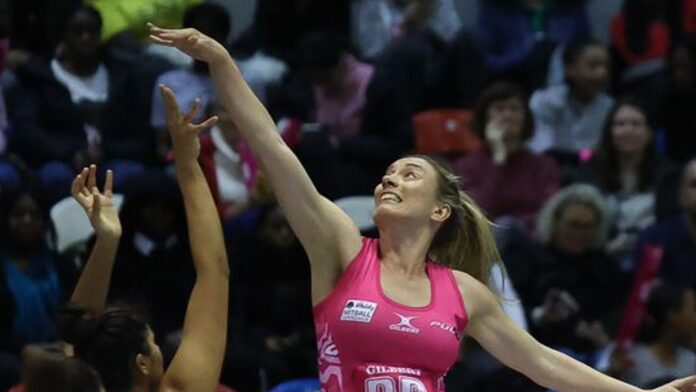 The Vitality Netball Superleague franchise have signed up to the Mental Health Charter for Sport and Recreation, which sets out how organisations can adopt good mental health practices across their sport

As London Pulse announce they have signed up to the Mental Health Charter for Sport and Recreation, Lindsay Keable talks openly about the pressures of elite sport and why she believes supporting athletes’ mental health is just as important as their physical health.

In committing to the charter, which is developed by the Sport and Recreation Alliance, the Professional Players Federation and Mind, London Pulse are underpinning their philosophy of supporting their athletes holistically.

All of their coaches have already completed the UK Coaching Mental Health Awareness for Sport and Physical Activity course and for players, regular welfare calls and workshops are part of their programme.

For all Vitality Netball Superleague players, the backbone of their daily lives and identities – training and competing for an elite team in a national league – was taken away in 2020. Keable, who is also an assistant housemistress at a school, remembers just how quickly everything changed earlier in the year.

“We trained on the Thursday, I had Nationals with my school on the Saturday and then Monday came. We were supposed to go to Bath, but were told that we couldn’t travel, and that the university was shut,” she said to Sky Sports.

“It was like taking a plaster off, one minute it was on and then it was ripped away. There was no middle ground in terms of playing behind closed doors or anything like that… everything just went.”

At the time, Pulse continued to adapt their training. The management team put together a comprehensive daily programme and the players kept as fit as possible in case a mini-season or tournament was on the cards. However, that was not possible and the season became null and void, something Keable said was being “difficult to swallow”.

The reality of the season being cancelled and the country’s lockdown meant that, like so many others, Keable had to face a very different day-to-day reality.

“It was a big change. I’m very much a people person, [in normal times] I will travel for hours if it means that I get to train with someone. It was very isolating.

“I totally understand how a lot of people’s mental health did change and for people who perhaps hadn’t had an issue before, it became something they started to become aware of.

Take a look back to April this year, when Sam Bird discussed the importance of supporting her players in all aspects of their lives.

Both Keable’s teaching at her school and her netball training moved online. With vastly increased screen time, limited personal contact and no sight of competitive matches or training in person in front of her, the netballer said the situation spurred thoughts which had not been there before.

“In my 10-year career, I only had once when I thought that I really didn’t want to go to training but during lockdown, there were those demons and sometimes they did get difficult to fight. You know, the ones that say it would be easy blame work being too busy or that there’s internet problems,” she shared very openly.

“It was tough. It was a unique situation to find myself in and I really had to dig deep to encourage myself. I’m blessed to have a great team, we all pulled each other through.

“Everyone had positive days and more difficult days at different times, and it was great to have people helping to pull you through and also saying that they understood.”

The 2020 season was going to be London Pulse’s first full campaign as a unit. After a challenging maiden term in the Superleague, a wealth of changes meant Sam Bird was knitting together a new group, and a diverse one in terms of age and experience levels.

With the season having been taken off the table, Keable said they missed out on vital bonding time on long coach journeys or flights up to Scotland. It has meant they have had to develop their personal relationships virtually, and the defender credits Bird and the coaching team for helping to facilitate that.

London Pulse’s head coach and CEO has always spoken about the importance of looking after her players as people, as well as athletes.

From speaking to her players, past and present, she’s clearly successful at doing that. Jodie Gibson has revealed how supportive Bird was during her injury challenges, Zara Everitt and Emma Thacker have also spoken about how much time she takes to get to know them and support them.

“I think Pulse are really preparing the players to have longevity in the sport,” Keable said.

“Sport is brutal, regardless of COVID-19, sport is absolutely brutal, and I can only applaud what Pulse are doing to make us into more holistic players because they are the types of players who last.

“I look at people like Rachel Dunn, and people who have had huge careers in Superleague, they’re the ones who are more prepared for all of the twists and turns and the upside-down elements of the rollercoaster.

“Mental health is so much bigger than just [coping with] COVID-19, it’s integral to you being an athlete and it’s about how you cope with different elements of the job.

“How do you cope with comments? How do you keep going and get up for training every day? What do you do when you’re selected or when you’re not selected?

“I know that I wouldn’t have had the career that I’ve had so far if I hadn’t had all of the mental health help, as well as the help with my physical health.”

Keable reiterates all of Pulse’s coaches have just completed a mental health awareness course and believes it is something all netball coaches should do.

“It’s so easy to get on and it starts opening up that avenue for coaches to embrace that area of their roles. It allows them to see that their role is so much more than just getting athletes physically ready for a match.

“Coaches are so important for some people, young people in particular, as sometimes they can be the only person someone enjoys seeing or has a really positive relationship with. They might be the only person they’re comfortable talking to about their mental health issues with.

“In this world, mental health doesn’t always stay the same, movements in it can be triggered by an incident, a moment or a bereavement. As I said before, sport is brutal.

“We don’t all have nice diagonal careers which are filled with positivity. There are knock backs and deselections and if we can prepare athletes for that, it makes a difference.”

Keable says these ups and downs arrive in business and personal lives too. She believes if athletes can be given the right support in their netball careers, it will allow them to transfer those skills into other parts of their lives, and perhaps help others too.

“A stigma that we’re slowing coming out of is that it’s a bad thing to talk about mental health issues,” Keable concludes. “We’re getting to a point where it is discussed.

“Mental health is a really serious matter and I’m so glad that everyone’s getting on board and highlighting the importance of it.”