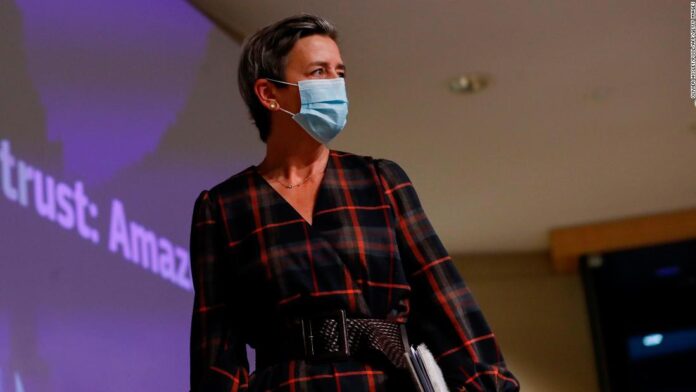 Biden has made clear that he wants to reset the US relationship with top allies, especially those across the Atlantic. But on complex questions like how global tech firms should be taxed, deep disagreements will remain, even under a new US administration. Meanwhile, Europe’s mission to crack down on misbehaving internet companies is unlikely to change.
This week, three days after European Commission President Ursula von der Leyen congratulated Biden on his win, the European Union unveiled formal antitrust charges against Amazon (AMZN) for abusing its dominance in online shopping, while opening a second investigation into the company’s business practices.
“[The] announcement on Amazon shows the desire to keep the antitrust pressure on US tech,” said Emre Peker, a director in the Europe practice of political risk consultancy Eurasia Group.

On digital taxes, Biden will have a chance to press reset from the early days of his presidency. Yet even then, it’s not clear that the United States and countries in Europe can come to terms. Talks brokered by the Organization for Economic Cooperation and Development in Paris on a global digital tax regime have so far failed to produce an agreement.
“I would find it pretty interesting if all [of a] sudden the US government said, ‘Yeah, you can have some of our tax base,'” said Elke Asen, policy analyst at the Tax Foundation’s Center for Global Tax Policy.
The bitter debate over how firms like Google (GOOGL) and Facebook (FB) should be taxed predates both President-elect Biden and President Donald Trump. Historically, companies have only been required to pay taxes on income in the country where they book their profits. But European countries argue they should also be able to collect so-called digital services taxes, given that these companies make money off sales in the region.
So far, the OECD negotiations have kept a lid on tensions. But a confrontation between France and the United States could be just weeks away.
France delayed collection of its 3% tax on the revenues of tech companies while talks at the OECD were taking place. But fed up with the lack of progress, it intends to begin collections shortly. If it does, the Trump administration could respond by slapping tariffs on $1.3 billion in French goods, including handbags and cosmetics, as soon as Jan. 6.
While the French government is eager to get off on the right foot with Biden, it’s not clear they’re willing to agree to another delay. The OECD now aims to hammer out a new agreement on taxes by mid-2021.
“Either one accepts an extension again for months, maybe years, or one considers that fair taxes on digital activities are urgent and in this case Europe sets the example,” French Finance Minister Bruno Le Maire said last month, according to Reuters.
Biden’s expressed commitment to a more multilateral approach to international diplomacy, instead of weaponizing tariffs, could provide fresh momentum to the OECD discussions. But Democrats have not endorsed digital services taxes in the past — and experts warn Biden may not prove any more amenable.
“The Biden administration would be potentially as concerned about taxes that seem to be targeted at US companies as the Trump administration is,” said Brian Jenn, a former US Treasury official who served as co-chair of the OECD’s Task Force on the Digital Economy from 2017 to 2019.

It’s not the only front on which Europe is trying to hold the biggest American tech companies to account.
The European Union has emerged as a key battleground for tech because of its tough rules on data protection, hate speech and competition. And under Margrethe Vestager, now serving a second term as the European Commission’s top antitrust official, the bloc has made clear that it’s willing to confront the likes of Google and Amazon.
The European Union’s claim that Amazon (AMZN) has breached antitrust rules exposes the company to potential fines of up to 10% of its annual global sales. That implies a maximum penalty of around $37 billion, based on the company’s forecasts for revenue this year.
Because Europe doesn’t have tech companies that can compete with Silicon Valley’s big names or China’s tech champions, the region’s response is to try to exert influence through regulation, Eurasia Group’s Peker said. The thinking: Europe is a huge consumer market, so it should have a hand in setting online norms.
“Europe sees an opening,” Peker said. In his view, a change in administration in the United States won’t alter the calculus.
On issues like antitrust, there’s a consensus in Europe and the United States that more should be done to rein in Big Tech.
Both Republicans and Democrats in the United States are more comfortable with the possibility of curbing Silicon Valley’s power than they were just a few years ago. House Democrats recently published a congressional investigation that found Amazon, Apple (AAPL), Google and Facebook hold “monopoly power” in key business segments, while the Department of Justice last month accused Google of stifling competition to maintain its powerful position in the marketplace for online search.
But regulators in Europe — which have fined Google billions of dollars for antitrust violations since 2017 — have a head start. And they’re inclined to keep going, no matter who’s in the White House.
Europe has taken the lead in areas such as disinformation, with tougher hate speech laws in countries like Germany, as well as on protecting privacy, following the rollout its General Data Protection Regulation in 2018. The European Union is also looking to create rules around the deployment of artificial intelligence. The Commission is expected to unveil its legislative proposal early next year.