Home World If Marijuana Gives You an Upset Stomach, You’re Not Alone 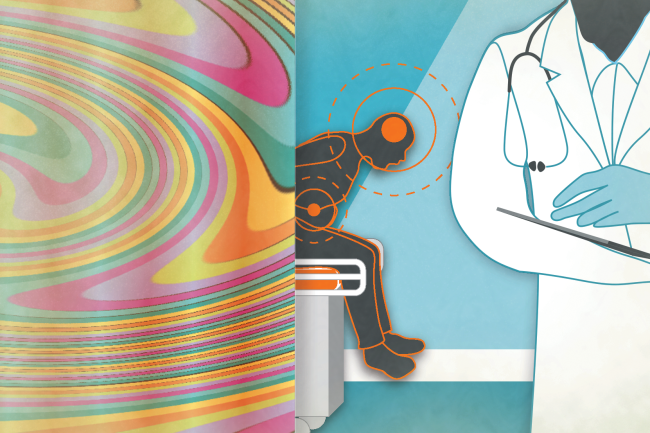 This Vital Signs column originally appeared in the December issue of Discover magazine as “Anything but Predictable.” Support our science journalism by becoming a subscriber.

Curled up in misery, the 50-year-old man croaked out a few words. “Still bad, doc.”

The man’s chief complaint had been nausea and vomiting. His condition prompted my favorite doctor trick: Take someone sick as the proverbial dog — retching, defecating, cramping — pump in IV anti-nausea meds and a few bags of saline, steep a few hours, and voila! New person. Given the ubiquity of stomach viruses and food poisoning, we see these unfortunate cases every day. Admittedly, bad things like sepsis and bowel obstruction can trigger vomiting. But for such a dramatic symptom, it’s considered benign until proven otherwise.

So when Brian didn’t get better, I took it personally. His blood pressure also had spiked and wasn’t coming down as expected.

He was on his third round of IV antiemetics, a class of drugs used to combat nausea and vomiting, as well as 2 liters of saline.

“I can give you the blood pressure meds through the IV,” I suggested.

His wife Diane, full of concern, piped up. “Oh, they’re not staying down, doc. I’ve never seen him this bad.”

He had been hospitalized 10 days earlier for a similar episode — agonizing, unremitting vomiting that arrived out of the blue. High-dose antiemetics hadn’t touched that bout either. The puzzling intractability had triggered a soup-to-nuts workup: abdominal CAT scan, diagnostic testing for stool pathogens and a lab workup that measured everything but copper levels. After two days, he had cooled off. But now he was back.

“Aawrgh,” Brian moaned again. His faced swelled and his jaw worked in slow motion like a python unhinging its mandible. Finally, he dry-heaved into the bag, but that brought no relief.

An hour later, the rest of his lab results were back. All were normal.

“Any change?” I asked, walking back into his room.

“Let me reexamine you,” I said.

Eyes shut, Brian unclenched his arms, unfolded his legs and rolled onto his back. A civil engineer, he mostly worked in an office, took occasional trips to building sites, and never came in contact with fumes. There were no space heaters or kerosene lamps at home, so carbon monoxide poisoning seemed far-fetched. Plus, his wife was fine. I listened to his heart and lungs, probed his abdomen — still sore all over, but unchanged — checked his skin for new rashes, but found no clues. A fine-tooth-comb interrogation regarding all possible exposures and ingestions revealed nothing new.

Time to switch channels — this wasn’t a stomach bug or food poisoning. Brain tumors can cause vomiting, and so can bizarre metabolic diseases like porphyria. The list is endless. But Brian was a 50-year-old professional white male. What else did that demographic suggest?

I stared at him, then asked as neutrally as I could: “Have you ever smoked marijuana?”

“Every day,” he answered matter-of-factly, “for years.”

“Huh. I think your vomiting is caused by the marijuana.”

“Don’t chemo patients use it to stop vomiting?” he asked.

Paradox or not, cannabis hyperemesis syndrome is here to stay. First described in 2004, recurrent vomiting — painful, protracted and intractable — is the hallmark. Striking at random, it cycles as discrete episodes every few weeks or months. Daily marijuana use over a number of years is the common thread. 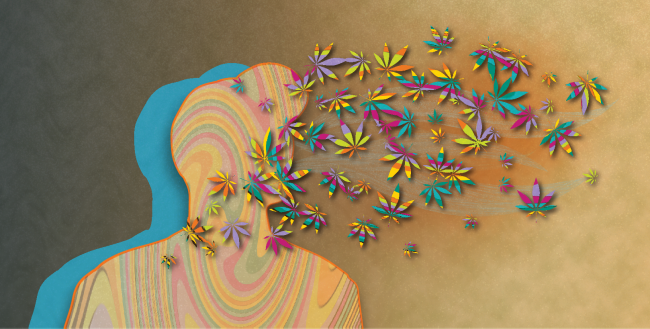 With legalization cresting throughout the U.S., and marijuana more abundant and more potent, cases of cannabis hyperemesis syndrome have spiked. About 10 percent of the adult population used marijuana last year, double the rate of a decade ago. Beyond that, the average THC content in marijuana tripled from 1995 to 2014. Interestingly, the CBD content, thought to decrease pain and anxiety, has been halved, so the THC-to-CBD ratio has soared sixfold. In Colorado, visits to emergency departments for hyperemesis syndrome doubled after legalization in 2009. Some estimates put the number of those with hyperemesis in the U.S. between 2 million and 3 million each year.

The cannabis plant contains some 100 different cannabinoids, the chemicals found in cannabis, so touting its effects as predictable is a triumph of head-shop marketing over biochemical reality. Cannabinoid receptors abound in the central nervous system. One theory on hyperemesis holds that chronic stimulation of anti-vomiting receptors in the brainstem causes a rebound effect. As to the syndrome’s on-and-off randomness, cannabinoids are stored in fat tissue, so weight loss, alcohol use or fasting could trigger release of accumulated compounds. No one really knows. What we do know is smoking marijuana daily for years puts you at risk.

None of that was of much immediate use to Brian. My urgent worry was that all this retching would rip his esophagus and he’d bleed out.

“The usual antiemetics don’t work with marijuana vomiting,” I told him. “Sometimes Valium-like medications work better, so let’s try those.”

A quirk of marijuana hyperemesis is that hot showers or baths briefly make it better. Brian remembered that, yes, he had been taking more showers lately. Again, the mechanism is unclear, but marijuana may misdirect blood flow to the gut, causing it to engorge; a hot shower diverts it back to the skin.

Another puzzle is why no one had asked him about marijuana during his previous admission. But some studies show that it takes a half-dozen ER visits and up to four years of symptoms before nailing the hyperemesis diagnosis. Plus, asking about marijuana use is tricky. Many people now consider it as innocuous as morning coffee, so the usual screening questions about drugs or medications may not be specific enough. On the other hand, asking point-blank risks sounding like a pre-legalization reefer-madness dinosaur.

Demographics aren’t what they used to be, either. Cannabis use among people over 50 has more than doubled in the past 10 years. These days, a 57-year-old is as likely to use marijuana as a 17-year-old. Eleven states have legalized recreational use, and nearly 30 have decriminalized it. The wave of TCH-tolerance is going tsunami.

I gave him a dose of IV Ativan, often used to treat anxiety. After a while, that seemed to help, but my unhappy patient was still cramping and nauseated.

“Probably a good idea to keep you overnight,” I ventured. “This needs to stop. The reason you got better in the hospital was no marijuana.”

“Is there a cure? Is it even worth asking?” Brian muttered.

Tony Dajer is an emergency medicine physician in New York City. The cases described in Vital Signs are real, but names and certain details have been changed.