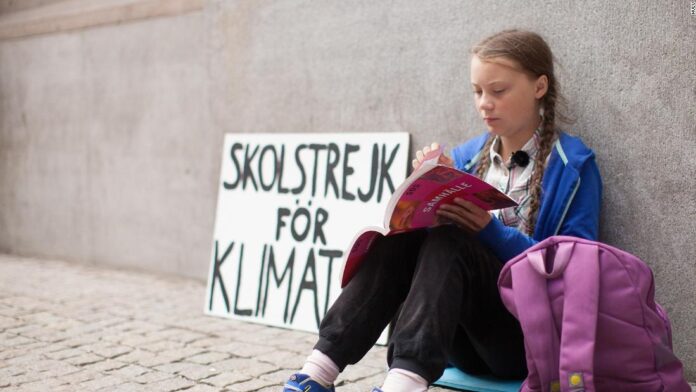 For those familiar with the name but perhaps not the details, at 15, Thunberg began a lonely school strike outside the Swedish parliament to awaken people to the dangers of climate change, arguing that kids must take up the cause because adults weren’t.
“I want you to act as if the house is on fire,” Thunberg says, chiding government leaders for their inaction, and for mortgaging the future of those generations that will survive them.
Directed by Swedish filmmaker Nathan Grossman, “I Am Greta” puts the lie to many of the criticisms directed at Thunberg, most from dismissive conservative pundits, whose unbecoming gibes are presented alongside images reminding us that Thunberg is a teenager, despite her extraordinary poise.
For starters, Thunberg very clearly chose this fight, not her parents, who have been accused of using her to serve their political goals. They appear, rather, understandably concerned and protective.
As for those put off by Thunberg’s tendency to lecture adults, the angry tone reflects both a sense of urgency and her frustration over their unwillingness to heed the science.
The documentary captures the remarkable inroads that Thunberg has made — addressing conferences and parliaments, meeting with world leaders like France’s Emmanuel Macron and strategizing with Arnold Schwarzenegger — as well as the dizzying demands all this has placed upon her time and energy.
The film feels too drawn out, however, during what amounts to its extended climactic sequence, in which she is invited to speak at the United Nations Climate Action Summit in 2019.
Because she won’t fly (Thunberg doesn’t just talk the talk but walks the walk, griping about the lack of vegan options at a climate conference), the trip requires a harrowing ocean voyage to New York — a journey presented in exhaustive and, indeed, exhausting detail.
“I Am Greta” nevertheless stirs admiration for Thunberg’s idealism, a passion that has transformed her from a shy kid into the leader of a youth movement.
“Change is coming whether you like it or not,” Thunberg says in one speech, expressing her attitude that when it comes to this particular fight, those in power must either lead or get out of the way.
In the broadest strokes, the film succeeds in its primary objective, which is to draw attention to Thunberg’s cause. It’s in the execution where “I Am Greta” sometimes can’t get out of its own way.
“I Am Greta” premieres Nov. 13 on Hulu.