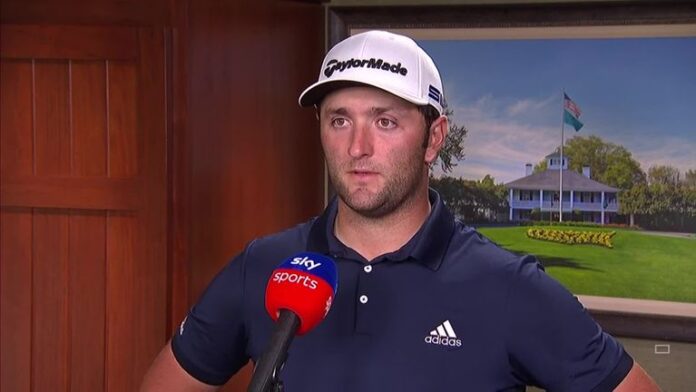 Bryson DeChambeau was wayward, but scrambled hard to fire an opening 70 at Augusta; “I’m greedy! Sometimes I can get a little greedy and I like taking risks. You’ve got to take risks to win tournaments”

Bryson DeChambeau insisted he was happy to take a few risks after recovering from a poor start to fire a two-under 70 on day one of the 84th Masters.

DeChambeau’s monster hitting has been a huge talking point long before his arrival at Augusta National, a course he believed was a “par-67” for him with the distances he was achieving during his practice rounds.

But a 67 looked a distant prospect when he ran up a double-bogey seven at the 13th – his fourth – after pulling a bold second from the pine straw long and left and into the bushes, from where he took a penalty drop, duffed a chip and needed three more to get down.

The US Open champion did get his first birdie of the tournament in the books at 15 and added two more at 16 and the second, and after another mistake caused by a wild drive at the seventh, a birdie-birdie finish lifted his spirits and left him in good position to challenge for back-to-back majors.

“I’m very happy with the patience I delivered to the course today,” said DeChambeau, who was frequently scrambling for pars with his driver sending him to all parts of the course. “I started off strong with a five footer and I misread it a little bit, and I just pulled my drive on 11 and went too far and made a great par save.

“Had an opportunity on 12, lipped it out. And then 13 I just didn’t draw it around the corner enough, and I got greedy. This golf course, as much as I’m trying to attack it, it can bite back. It’s still Augusta National, and it’s the Masters. It’s an amazing test of golf no matter what way you play it.

“I tried to take on some risk today. It didn’t work out as well as I thought it would have, but at the end of the day I’m proud of myself the way I handled myself and finished off. Birdieing eight and nine was a testament to my focus level, and wanting to contend here.”

Asked if he considered laying up at the 13th, he admitted: “Yes, yes, I did, but I’m greedy! Sometimes I can get a little greedy and I like taking risks. You’ve got to take risks to win tournaments, and albeit I made double from it, I still think over the course of four days, I can get that back to under par.”

Playing-partner Jon Rahm also endured a rocky start following the three-hour weather delay early on Thursday, the Spaniard making bogeys at 11 and 12 before balancing the books with birdies at both par-fives on the back-nine.

After a nice three at the 18th, the Spaniard eagled the second and birdied the third to race to four under, although he also dropped a shot at seven and parred in to return a 69.

“Happy where I ended up,” said the world No 2. “Still feels a little bit sour because of my mistakes on seven and eight, but it is what it is. You’re going to make mistakes around here.

“I found myself in a spot on seven that I’ve never been and never expected to be. You would never expect that. But I’m happy with the round. I would have taken three under starting the day, it’s a good start to the tournament.”

Rahm also gave an insight into the distances DeChambeau was hitting his drives, adding: “Luckily for us he wasn’t very straight on the first few holes. He was kind of on par with us, but there was a couple of them that were reality checks.

“It’s a different golf course, but I think today proves that no matter how far you hit it, you still need to make the putts. He got a two under round because he also got a lot of up‑and‑downs and scrambling done. I think his short game is being drastically elevated right now.”