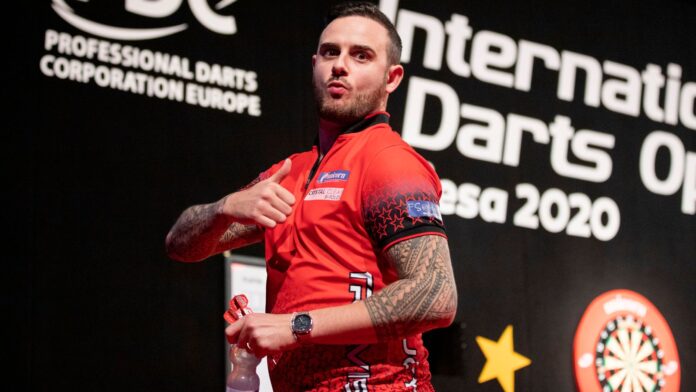 Jermaine Wattimena, Ian White and Ryan Searle also claimed Grand Slam spots, with Michael Smith the overall winner of the Winter Series; Coverage of the Grand Slam of Darts gets underway on Monday with a bumper double session of action starting at 1pm on Sky Sports Arena

Joe Cullen beat Krzysztof Ratajski to claim the final tournament of the PDC Pro Tour regular season, while Jermaine Wattimena clinched a spot at the Grand Slam of Darts.

Cullen saved his best performance of the day for the final, averaging 105 to beat Ratajski and claim his second title of the year and the £10,000 first prize on offer for Saturday’s action.

The Rock Star, the world no 17, beat Michael van Gerwen to win the International Darts Open last month, and never looked back after a stunning first round that saw him fight back from 5-0 down against Justin Pipe.

Cullen went on to beat Pipe 6-5 before accounting for Chris Dobey, Niels Zonneveld and Boris Krcmar on his way to the last eight where he edged out Daryl Gurney – a defeat that ended Superchin’s hopes of a place in the Grand Slam of Darts.

A 7-3 win over Andy Boulton sealed his place in the final where he proved too good for Ratajski with an 8-4 victory that sees him off to the Grand Slam, which starts on Monday, in perfect fashion.

Going into the final day of action on the Pro Tour, places at the Players Championship, the World Championship and the Grand Slam were all up for grabs.

Jeramine Wattimena backed up a strong week’s work with a run to the last 32 that coupled with early exits for Brendan Dolan and Vincent van der Voort meant he claimed the final sport on offer at the Grand Slam via the highest placed player on the Winter Series Order of Merit.

White and Searle’s Players Championship titles earlier in the year meant they completed the field for the next televised major, the draw for which took place on Saturday night, while Boris Krcmar, Niels Zonneveld, Karel Sedlacek and Darius Labanauskas took the final four spots at the Players Championship finals.

Wayne Jones has moved into the field for the World Championship with two events remaining with Andy Hamilton and John Henderson also hanging onto the spots for the Alexandra Palace finale to the season.

MVG caught up in ‘rat’ controversy

Van Gerwen was playing in his second event of the week but saw his run ended at the hands of Callan Rydz in the last 64, but there was more controversy about a reported exchange with Jonathan Worsley.

Worsley was removed from the final day of action after posting details on Facebook about an exchange with the world no 1 that came about because of an argument over clothes worn for marking matches. Worsley wrote that he was given a warning by the tournament director on Thursday for wearing a shirt that didn’t follow the PDC dress code after spilling a drink down his own shirt on Wednesday

The world no 104 said he then asked the tournament director for clarification over the rule when someone was marking Van Gerwen’s game in jeans and a t-shirt. Having removed the initial post Worsley then released a statement confirming an exchange with Van Gerwen on Saturday, who he claimed called him a ‘rat’ and tried to ‘intimidate’ him.

After the day’s action had concluded Van Gerwen released a statement of his own, confirming that he had called Worsley a rat and that the Welshman ‘tried to lay his hands on me’ and ‘once that has happened we all know there is only one outcome.’

The PDC and the DRA (Darts Regulation Authority) have yet to comment on the incident.

Over the next four weeks, a relentless schedule will round-off the PDC season and finalise the field for this year’s World Championships which remain scheduled for Alexandra Palace in mid-December.

It’s the Grand Slam of Darts on Sky Sports with all nine days from Coventry getting underway on Monday, November 16 and following that, the tungsten stays at the Ricoh Arena with three days of Players Championship Finals action and the final qualifier for the World Championship.

Sky Sports Darts will keep you across all the action as the season reaches its climax. As well as all the action, The Darts Show podcast will catch up with all the players, discuss the talking points and get expert opinion from former world No 1 Colin Lloyd.

Follow the action from the Grand Slam with all nine days covered on Sky Sports Arena – and if you are out and about follow updates via our live blogs and @SkySportsDarts.