Home Sport DJ to stay in attack-mode at Augusta 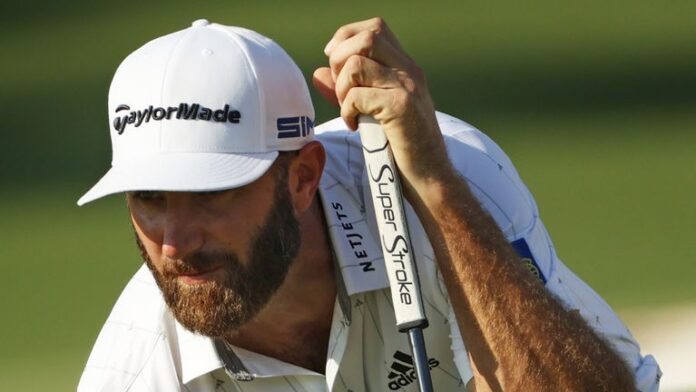 “I think I’ve got a good game-plan and I’m not going to change it. I’m very comfortable with having the lead going into Sunday. I’ve been in this situation a lot of times, and I’m looking forward to the challenge”

Dustin Johnson vowed to continue with his aggressive game-plan as he takes a commanding four-shot lead into the final round of the Masters.

Johnson insisted he was comfortable with his position despite being unable to convert four previous 54-hole leads in majors into victories, comparing his current form to his imperious performances early in 2017.

He arrived at Augusta National as the clear world No 1 on the back of three successive victories, only to be denied the chance to compete for the Green Jacket when he injured his back in an unfortunate fall down a staircase at his rented home on the eve of the first round.

But he is high on confidence as he looks to atone for that misfortune, and his optimism was justified following a high-quality seven-under 65 on day three which separated him from the chasing pack and matched the 54-hole scoring record of 16-under par.

“I would say the game is in really good form right now,” said the world No 1, with more than a hint of understatement. “You know, it’s very similar to what it was back in 2017. It’s just very consistent.

“I feel like I’ve got a lot of control with what I’m doing, controlling my distance well with my flight and my shape. I’m very comfortable standing over the golf ball right now, and obviously that’s a really good feeling.

“With the conditions being soft, you can be really aggressive no matter what club you have in your hand, as long as you feel comfortable with how far you’re going to fly it. I feel like the golf course is in really good condition with all the rain, and it’s just so soft so you’ve got to be aggressive and you’ve got to attack the flags.

“Going into tomorrow, I think I’ve got a good game-plan and I’m not going to change it. I’m going to have to go out and play well. There’s a lot of really good players right around me, so as we all know here, if you get it going, you can shoot some low scores.”

Johnson has endured more than his fair share of final-round disappointments in majors when either leading outright (twice) or tied for the lead (twice) after the third round, most notably at the US Open 10 years ago when he led by three before he triple-bogeyed the second, doubled the third and dropped another at four, setting the tone for a closing 82.

More recently, he was unable to hang onto a one-shot lead at the PGA Championship in August and finished two behind Collin Morikawa, but the 36-year-old insisted that Sunday would be a “good day”.

“If I can play like I did today, I think it will break that streak,” said Johnson, who made a spectacular start to his third round with a towering five-iron to tap-in range for eagle at the second, backing that up with a birdie at the third and a 30-foot putt for another at the fourth before cruising to the turn in 31.

“But it’s just 18 holes of golf. I need to go out and play solid. I feel like I’m swinging really well. If I can just continue to give myself a lot of looks at birdie, I think I’ll have a good day.

“I’m very comfortable with having the lead going into Sunday. I’ve been in this situation a lot of times. I’m looking forward to the challenge.”