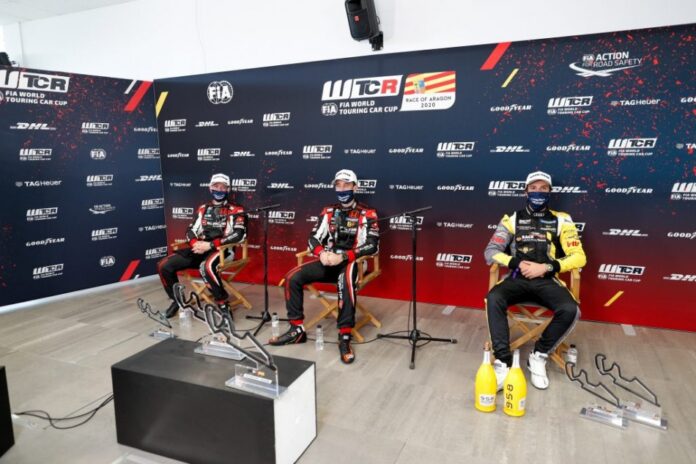 Q:
Esteban, from P16 to your fourth win of the season, even if it was handed to you by Néstor. Talk us through it following such great strategy from the team.

EG:
Yeah, it was crazy actually. It was a crazy start to the day. It’s sunny but this track, we knew when we came here [for testing] in March that it’s got some similar conditions to this and we were wondering why it takes so long to dry – and it was kind of the same thing, so we said ‘OK, let’s do it’. Also, in the warm-up laps coming out of from the pits I had wets on the rears and I had cars in front with full slicks and they couldn’t drive. Then we went to the grid, we huddled together and said ‘look, there is nothing to lose here, we better gamble’. We know this track is extreme on drying slowly, even though the sun was scorching the Tarmac. We did the right strategy, Obviously it was not easy because we were all starting out of the top 10. But we climbed the order, we were very smooth on the overtaking, trying not to get any hit or anything. We kind of kept pushing until three-quarters of the race in case the track gets dry or there’s a safety car. But in the end we just knew we had it in the bag and Néstor let me by on the last lap. Obviously I’m very thankful to him. We did the team strategy because obviously I need the points. It’s going to be very difficult to be honest, but these five points are important. It’s his win, but the points in the end are what matter. We are very happy with the one-two, we have very small tool and weapons to fight this weekend, because the others have a gun and we have a knife. But we still play very well with our concentration, with our heads, and we played smart and it paid out. So, I’m very thankful to the team, to Honda. So yep, it’s a win and a one-two, so very happy.

Q:
That strategy, you took quite a gamble switching so late, especially as Tiago of all people could have scuppered it when he lost his wheel. Why did it take so long to make the switch?

EG:
In the end, it was what it was. We probably took a bit of a risk there. We had a big gap. In the end [a safety car] didn’t happen but it could have happened. Obviously when you get a safety car you extend two laps, so it’s probably better to do it two or three laps from the end. But in the end it was fine and it paid off, so I’m very happy with that. Now if you want to do a rain dance and some clouds could come out that would be…

Q:
Bebu, congratulations. Thank goodness you did have that testing here. So, what do you know about Race 2 and how much is this track going to change?

NG:
It’s going to be difficult, to be honest, because we know with the similar conditions we don’t have the pace to fight with them. Yesterday we were 1.3s-1.5s behind them, so they are really strong in dry conditions. Race 2 and Race 3, it’s going to be difficult to fight, but let’s push, let’s try. You never know. We said this morning everything can happen and you see the first race. It’s obvious that in difficult or damp conditions our car performs much better, even with the wet tyres on the rear, but it doesn’t matter – we have a good combo when it is damp. Then when it is dry we miss a lot of acceleration, we lose a lot of power on the straight. Uphill on the main straight is the worst part for us, but you see anything can happen. Last time here Ehrlacher had a turbo problem, so you never know. We have to fight until the end. Esteban is in a good position. He is starting towards the back, but he has all the support of all three drivers, so we will do whatever it takes to win this championship. If we cannot win we will be happy because we did our maximum.

Q:
Gilles, you are making waves in the main championship, but these were also good points for the WTCR Trophy. You have quite a fight on your hands with Nathanaël Berthon, don’t you?

GM:
Yeah, exactly, it is quite close with my team-mates. Thanks to him for the fair battle, if you can call it that. Anyway, we’ve been working as a team throughout the season, so that’s what we did here as well and I think it’s the first time it’s going in my favour. A good performance, my fourth podium this season and my rookie season, so I’m really happy, I didn’t expect this one. We were missing out a little bit on pace yesterday. But these conditions create opportunities, we made the right call and there we are: third.