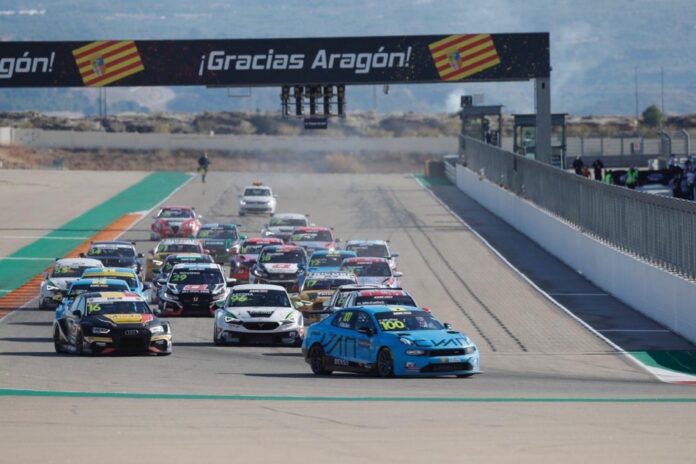 Yvan Muller scored a reverse-grid win in Race 2 at WTCR Race of Aragón as his nephew Yann Ehrlacher was crowned the 2020 King of WTCR at MotorLand Aragón*.

“What a day,” said an overwhelmed Ehrlacher. “I have been waking up every morning and going to be every night thinking about this day. I’m super-thankful to everyone who has supported me. It’s amazing, I cannot believe it.”

Muller made a clean start from the DHL Pole Position, but fellow front-row starter Norbert Michelisz was beaten into Turn 1 by Gilles Magnus from third on the grid.

Behind them, there was drama and frenetic action as Guerrieri found himself caught up in the thick of a battle from his P18 slot on the grid. The ALL-INKL.COM Münnich Motorsport Honda Civic Type R TCR slammed into the back of Bence Boldizs’ Zengő Motorsport CUPRA Leon Competición, both cars incurring heavy damage – and Guerrieri was forced to pit into retirement.

Ehrlacher started ninth in his Cyan Racing Lynk & Co and began cautiously, but picked up places and was running in sixth by lap four – which was enough to clinch the title.

On lap eight, Guerrieri’s team-mate Néstor Girolami retired in a cloud of smoke from his Honda, which led to a safety car interruption.

Muller made a good break once the racing action resumed with two laps to go, chased by Jean-Karl Vernay’s Team Mulsanne Alfa Romeo Giulietta Veloce TCR by Romeo Ferraris which had moved up from sixth on the grid to claim second place.

Michelisz finished fifth despite appearing to drop oil in his BRC Hyundai N LUKOIL Squadra Corse Hyundai i30 N TCR, the 2019 King of WTCR handing his crown to the man who finished right behind him.

*Subject to the publication of the final results