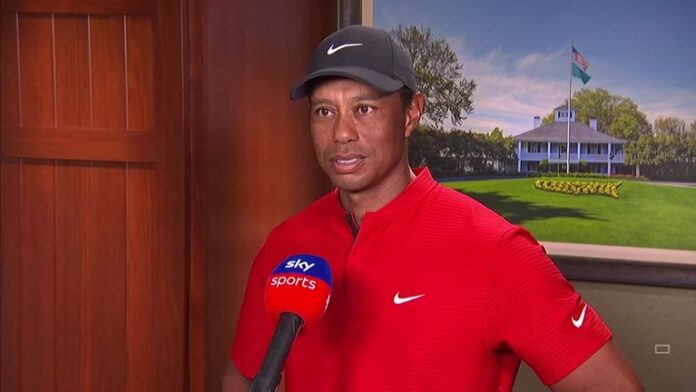 “I didn’t commit to the wind, and I also got ahead of it and pushed it, too, because I thought the wind would come more off the right and it was off the left, and that just started the problem from there”

Tiger Woods admitted it was a “lonely” experience dealing with making a 10 at the par-three 12th on Masters Sunday, but he was proud of his fightback over the last six holes.

Woods, understandably disappointed at the prospect of having to present a new champion with a Green Jacket, was scuppered by the changing wind direction at the iconic 12th and came up short with his tee shot before dumping another in Rae’s Creek.

His fifth sailed over the green and into the rear bunker, and worse was to follow when he bladed his first splash-out and donated a third ball to the water before he finally holed out for a septuple-bogey 10 – the first double-figure score on any hole in his professional career.

But his response to adversity was remarkable, hitting back with a birdie at the next before closing with four in a row to salvage a 76 and ensuring he would finish in red numbers for the tournament.

“I committed to the wrong wind,” he said when asked what went wrong at the 12th. “The wind was off the right for the first two guys, and then when I stepped up there, it switched to howling off the left.

“I didn’t commit to the wind, and I also got ahead of it and pushed it, too, because I thought the wind would come more off the right and it was off the left, and that just started the problem from there.

Playing the final third of his round in five under lifted his spirits as he prepared to head to the Butler Cabin for the presentation ceremony, although he was still struggling to contain his frustration at not mounting a better defence of his title having opened with an encouraging 68.

“That’s part of our sport,” he said, reflecting on his spectacular finish. “As I was saying in there earlier, this sport is awfully lonely sometimes. You have to fight it, nobody is going to bring you off the mound or call in a sub.

“You have to fight through it. That’s what makes this game so unique and so difficult mentally. We’ve all been there, unfortunately. Unfortunately I’ve been there and you just have to turn around and figure out the next shot, and I was able to do that coming home.”

Woods also paid tribute to Dustin Johnson, who was marching to a record-breaking victory as the five-time winner was giving his post-tournament interviews.

“He’s an amazing athlete,” Woods added. “He’s one of the first guys to ever bring athleticism to our sport.

“DJ has just an amazing ability to stay calm in tough moments, and in order to win this event, and we all know as past champions how hard it is, the emotions we have to deal with out there. There’s no one more suited to that, I think, than DJ.”