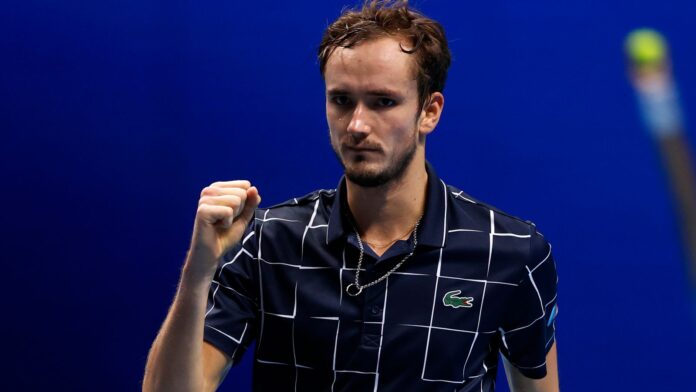 Daniil Medvedev recorded his second win over Alexander Zverev in the space of eight days to seal his first-ever win at the ATP Finals in London on Monday night.

The Russian made his debut at the event 12 months ago but failed to win any of his three round-robin matches.

He returned to form impressively by beating Zverev to win the Paris Masters last weekend and the world No 4 scored a repeat with a 6-3 6-4 victory in a bruising encounter at the O2 Arena.

It is the first time in his four appearances that Zverev, the champion in 2018, has lost his opening match.

The German has been competing under the considerable shadow of serious domestic abuse allegations made by ex-girlfriend Olga Sharypova that he again denied in his pre-tournament press conference.

On the court, Zverev has appeared unaffected, but his recurrent second-serve troubles reared their head early on in this contest.

The 23-year-old served six double faults in his first three service games, losing two of them, and the second break saw Medvedev take control after a series of lengthy rallies and close games.

A break in the seventh game of the second set put the Russian within sight of the finish line, and in the next game he pulled out an underarm serve. Zverev scrambled well to retrieve it but miscued a volley.

“My wide serve was not working as well as I would like and he was returning good. I see that he was five meters behind the baseline and I have the ball close to my racket, so I thought, Go for it.”

Daniil Medvedev on his underarm serve

Zverev won only four of 19 second serve points in the match – a statistic that ultimately proved costly as the wily Medvedev closed out the victory with a leaping backhand drilled crosscourt.

The German was scathing of his own performance, saying: “I need to play better. I need to be better on court. Because if I play like today, I’m not going to win any matches here this week. Now I can’t afford to lose. I need to beat Diego, I need to beat Djokovic to have a chance to go to the semi-finals.”

Medvedev will take on Novak Djokovic on Wednesday while Zverev needs a win over Diego Schwartzman to keep his semi-final hopes alive.