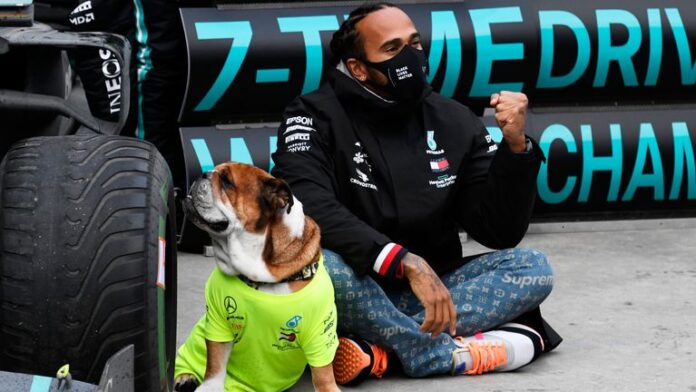 The 2016 world champion and Sky F1 pundit hails his former team-mate’s success – and says it stands alongside the most remarkable achievements in any sport, ever

And the Sky Sports F1 pundit has warned that Hamilton’s assertion that he still feels as though he is “only just getting started” should be a cause of worry for the rest of the F1 field.

Rosberg, who was a team-mate and fierce title rival to Hamilton across four seasons at Mercedes, praised the British driver’s latest milestone during an appearance on Sky Sports News.

“No one would have ever thought that Michael Schumacher’s titles would be equalled or broken, and yet now he’s there,” said Rosberg, the last driver to beat Hamilton to the world title in 2016.

Now level with Michael Schumacher for the most championship titles in F1 history, debate over where Hamilton ranks in the list of the sport’s greatest-ever drivers has inevitably intensified.

“I’m not going to say here and now one is better than the other, I think they’re there or thereabouts,” said Rosberg of comparisons between Schumacher and Hamilton.

“You’d mention Schumacher, you’d mention Senna, you’d mention Fangio. I would probably filter out those four – Lewis, Senna, Fangio and Schumacher. Who’s the best? It’s just impossible to say but equally in their own way they’ve all been just unbelievable.”

Rosberg: Why rivals should be worried

“To beat him you need to get everything 100 per cent perfect otherwise you have no chance.”

Rosberg, a team-mate to Hamilton as teenagers in karting long before they both graduated to F1 and competed over the sport’s biggest prize, believe it is ominous for the would-be challengers to hear the newly-crowned seven-time champion already talking of seeking further success and improvement.

“I think to hear that for the opposition is going to be a bit of a scary thing!” admitted Rosberg. “For the likes of Bottas or Verstappen or Vettel or whoever else is still out there, if he’s saying it’s just the beginning – my goodness, what’s he going to end up with?

“I’m going to be interested to follow his decisions, what he decides to do going forward, since he hasn’t done a contract yet for next year.”