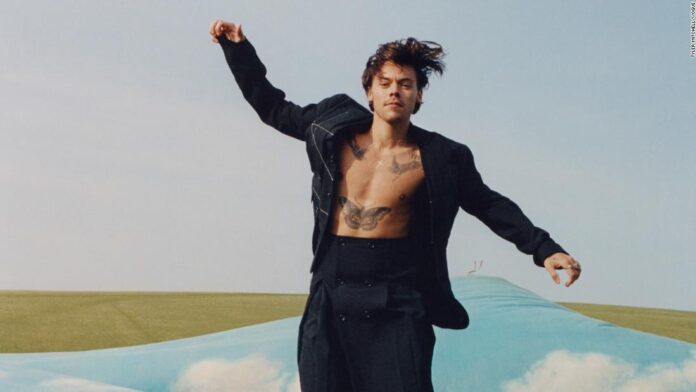 Harry Styles just added another accolade to his growing list of achievements. Starring on the cover of US Vogue’s December 2020 issue, he is the first man to front the fashion title solo.

In the new issue, Styles talks about his plans to travel to Tokyo, his music and — of course — his sartorial choices, which have been known to blur gender lines.

“As a kid I definitely liked fancy dress,” Styles told Vogue. “I was really young, and I wore tights for [a school play]. I remember it was crazy to me that I was wearing a pair of tights. And that was maybe where it all kicked off!”

The photos were taken by the highly sought after photographer Tyler Mitchell. His career was propelled to great heights in 2018 when he became the first Black photographer to shoot a Vogue cover. Beyoncé was his subject on that occasion.
Earlier in the year, Styles made headlines after he appeared on the cover of Beauty Papers, a biannual magazine based in London, in fishnets and lipstick.

While Styles is by no means the first man to challenge gender stereotypes of clothing, he’s become one of a few mainstream artists to do so.

“What women wear. What men wear. For me it’s not a question of that,” Styles told The Guardian last year. “If I see a nice shirt and get told, ‘But it’s for ladies.’ I think: ‘Okaaaay?’ Doesn’t make me want to wear it less though… I think the moment you feel more comfortable with yourself, it all becomes a lot easier.”