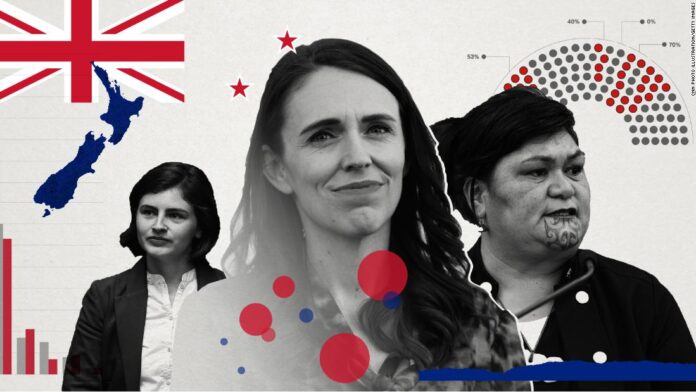 But in New Zealand, that was just the start.
When Prime Minister Jacinda Ardern was reelected in a landslide last month, she brought with her a diverse cast of politicians that make up what is — by some measures — the most inclusive parliament in the world.
Almost half of New Zealand’s newly sworn-in Parliament are women and 11% are openly LGBTQ. Both New Zealand’s Indigenous Māori and people with Pacific Island heritage are represented at a slightly higher rate than in the general population.
Politicians from diverse backgrounds aren’t just making up numbers in Parliament — they’re in key positions of power.
Eight of Ardern’s 20-strong cabinet — the highest-ranked lawmakers — are also women, and a quarter are Māori. Deputy Prime Minister Grant Robertson will be the first openly gay politician to hold that role in New Zealand. And foreign minister Nanaia Mahuta, who wears a moko kauae or traditional Māori face tattoo, is the first Indigenous woman in New Zealand’s history to represent the country in that position.
“It looks like New Zealand looks,” said Jennifer Curtin, a professor of politics and director of the Public Policy Institute at the University of Auckland, of the country’s government. “We’re not male, pale and stale anymore.”

New Zealand already had a relatively diverse Parliament. Following the 2017 election, 38% of New Zealand’s MPs were women — a record in the country. Now it’s 48%.
The proportion of openly LGBTQ lawmakers has also increased from 7% to 11%.
Māori representation has slipped, however, from 23% at the last election to 21%. That’s the lowest level of Māori representation since 2014, but it is still higher than the total proportion of people who identify as Māori in the general population — around 17%.
Diversity in the New Zealand Parliament

Almost half are women, a record in New Zealand. Last election, 38% of MPs were women.
More than one out of 10 parliamentarians are openly LGBTQ, the highest proportion in New Zealand’s history.
One fifth are Māori, New Zealand’s Indigenous people. That’s higher than the general population, but the lowest proportion in Parliament since 2014.
New Zealand’s Parliament has had Māori seats since 1867, soon after the country was founded, but these have sometimes been seen as tokenism. Until 1967, Māori candidates were only allowed to contest a limited number of Māori seats, and it was only in 1975 that Māori were able to choose whether they wanted to be on the Māori electoral roll.
Kelvin Davis, who is Māori and the deputy leader of Ardern’s center-left Labour Party, said he was happy with the level of Indigenous representation in New Zealand’s Cabinet. “I think (the level of representation in Cabinet) is a first ever and we’re proud to be a part of that,” he said, according to public broadcaster Radio New Zealand (RNZ).
Labour MP Louisa Wall, who is Māori and lesbian, says that the increase in LGBTQ representation will create an even more progressive society. New Zealand introduced same-sex civil unions in 2004, and in 2013, Wall spearheaded a bill to make same-sex marriage legal.
“We have come a long way and for me it is about representative democracy. We reflect our larger New Zealand population,” Wall said, according to RNZ.
Curtin said that having a representative legislature meant there was a range of perspectives at the decision table. “Diversity in itself is good,” she said. “Anything that disrupts the homogeneity and the dominance of the White majority, or the colonizers, of this place.”

Here’s how that stacks up globally

Out of thousands of active lawmakers across the globe, just 194 are openly gay in 42 countries, according to data collated by Andrew Reynolds, from the School of Public and International Affairs at Princeton University.
Of those countries, New Zealand now has the highest proportion of openly LGBTQ lawmakers, at 11%, according to his data. (Previously it was the United Kingdom, at 8%.)
In New Zealand, 3.5% of adults identified as gay, lesbian, bisexual or another sexual identity other than straight, according to a 2018 Statistics New Zealand survey of approximately 12,000 households. The surveyors, however, said the result “may underestimate” the true proportion as the data was collected via face-to-face interviews.
When it comes to gender New Zealand doesn’t have the highest proportion of women lawmakers in the world — that title goes to Rwanda, where 61% of seats in the country’s lower house are occupied by women. The country lost so many men during the 1994 genocide that women stepped in to fill key leadership roles.
But New Zealand’s 48% female legislature is the highest of all OECD countries, alongside Mexico (where a 2014 law dictates gender parity in politics), and well above the global average of 25%.
New Zealand’s closest neighbor, Australia, only has 31% female representation in its lower house, while Pacific Island countries have an average of 6%.
When it comes to the overall population, there are slightly more women than men in New Zealand — globally there are slightly more men than women, according to the CIA World Factbook.
As for ethnic diversity, the country is still lacking when it comes to representation of Asian New Zealanders, for example, who make up 15% of the country’s general population, but only hold 7% of seats in Parliament.
But demographer Paul Spoonley, a professor at Massey University in Auckland, said a parliament didn’t need to perfectly match the overall makeup of the general population to be representative — although warned if it was too different the public might lose trust in their lawmakers.
“I think it’s really important that a political system represents the diversity including the ethnic diversity of a population, and that’s because they bring that voice and experience,” he said.

But there’s still room for improvement

The significance of all this is that New Zealand’s Parliament looks more like the general population — which in turn makes it more representative.
But that doesn’t mean it’s perfect.
While one in four New Zealanders have a disability — defined by Statistics New Zealand as a long-term limitation in a person’s ability to carry out daily activities — Curtin said she was not aware of any MPs with disabilities. That’s something disability advocate Jonny Wilkinson has also criticized, saying that the country’s “largest minority group” still isn’t represented.
And Spoonley, the demographer, pointed out that diversity includes making sure a range of ages and socioeconomic backgrounds are represented.
“It’s not a finished project,” Curtin said.
Not everyone in New Zealand is happy about Ardern’s diverse Parliament. Right-wing blogger Olivia Pierson said Mahuta’s moko kauae wasn’t fitting for a foreign diplomat and that her appointment showed Ardern had “gone full wokelette on stilts.”
While New Zealand may have a diverse Parliament now, there’s no guarantee for the future.
The country’s right-leaning parties have less diverse representation than its left-leaning parties, so a switch in government in 2023 could mean a less inclusive Parliament. New Zealand’s main opposition party, National, has only two Māori MPs and only 30% of its lawmakers are women. No current National MPs are openly LGBTQ.
National leader Judith Collins — who famously asked “is there something wrong with being White?” — has dismissed concerns about diversity, arguing that her party has a “diversity of thought.”
Curtin says she hopes that there’s a “contagion effect” where parties on the right decide to become more diverse so they can attract voters.
“We have seen ebbs and flows on the representation of women before,” she said. “It’s not a given that this degree of diversity will hold beyond the next three years.”